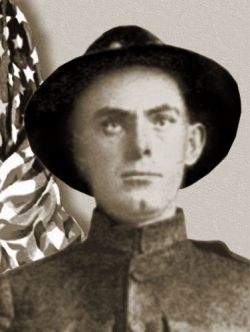 Robert Lester Blackwell, Congressional Medal of Honor winner, was born in Hurdle Mills in the Bushy Fork Community of Person County. He was the second son and youngest of six children of James B. Blackwell, a tenant farmer and Civil War veteran. Lester Blackwell attended Allen School of the Terrell system and, when he was drafted into the army on 19 Sept. 1917, was unmarried and a farmer in Person County. After basic training at Fort Jackson, S.C., he was assigned to Company K, 119th Infantry, Thirtieth Division, which arrived in France on 24 May 1918. The following October, Blackwell's bravery on the battlefield near St. Souplet, France, earned for him the only Congressional Medal of Honor awarded to a North Carolinian during the First World War. The citation reads: "When his platoon was almost surrounded by the enemy and his platoon commander asked for volunteers to carry a message calling for reinforcements, Private Blackwell volunteered for this mission, well knowing the extreme danger connected with it. In attempting to get through the heavy shell and machine gun fire this gallant soldier was killed." Blackwell also received the Cross of War from both the Italian and Portuguese governments. A monument was erected in his memory on the lawn of the Person County courthouse in Roxboro, and a North Carolina historical marker was placed along state Highway 49, near the site of his home.

Correction to this entry: This entry states that Robert Lester Blackwell was the only North Carolinian to receive the Congressional Medal of Honor for service in World War I. Another North Carolinian, Samuel I. Parker, a descendant of Supreme Court Justice James Iredell and Governor Abner Nash, also received the award. He received the award for his uncommon valor on July 18, 1918, near Soissons, when he ran directly into machine gun fire, killing the gunner with his pistol.

I believe three men "from

I believe three men "from North Carolina" received the Congressional Medal of Honor for their service in WW1. In addition to Robert Blackwell and SI Parker, we must include Henry Johnson. Born and raised in Winston-Salem we know he moved to New York for work as a teen-ager but we do not know the exact year. His family, however, remained in Winston-Salem so we should consider that as his "home". He served in the 369th Regiment, the "Harlem Hell-Fighters". He was awarded the Purple Heart in 1996 due to his case being brought forward by Herman Johnson, a veteran WW II Tuskegee Airman, the Distinguished Service Cross in 2002 and the MOH in 2015. North Carolina has failed to recognize Henry Johnson through the years. There is much more to this story that needs to be told.

Thank you for visiting NCpedia and especially for sharing this error with us regarding Samuel Parker.

I appreciate you taking the time to let us know, and I also apologize for the delay replying.  Due to a technical glitch I believe, we did not see your post until this week.

I have made an update to the entry, and I am looking into incorporating an entry on Samuel Parker as well.  We need an entry on him!

We appreciate viewers taking the time to let us know about errors in the content and help us keep the content up to date.