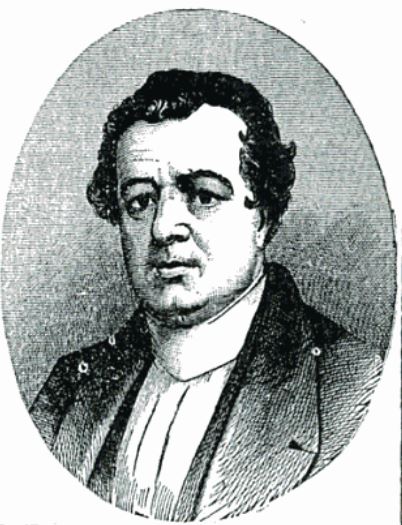 William Tomlinson [Theophilus] Brantly, Baptist clergyman, college president, and editor, was born in Chatham County, the son of William Brantley and the grandson of John Brantley, who settled on an 880-acre tract along Rocky River in 1749. At some unknown time he came to be called Theophilus and without actually changing his name legally, he dropped Tomlinson and substituted Theophilus. Born into a family of many children and moderate means, Brantly had little opportunity of receiving an adequate education or of escaping the small farm operated by his father. During the Second Great Awakening, however, he found a way to become a national success. Converted at a Baptist revival meeting in 1802, he began preaching throughout Chatham County. His sermons soon brought him under the notice of a wealthy neighbor who offered, on the condition that he prepare himself for the undertaking, to pay his expenses for a college education. When the doors of South Carolina College first opened in 1804, Brantly was among the initial entering class. Before he was graduated in 1808, he had found in the college's first president, Jonathan Maxcy, the man after whom he would style his life. After serving distinguished presidencies at Union College, N.Y., and at Brown University, Maxcy had come to influence a generation of southerners at South Carolina College.

Upon graduation, Brantly settled at Augusta, Ga., serving as rector of Richmond Academy. There he organized the First Baptist Church, making it within two years one of the largest in Georgia. At the same time he married Mrs. Anna McDonald Martin of Sparta, Ga., the sister of Georgia Governor Charles J. McDonald. His marriage and his apparent talents as a clergyman enabled him to become one of the most famous Baptist divines in America. In 1811 he moved to Beaufort, S.C., where he took over the important Baptist church of that town. He also created the short-lived Beaufort College. Although the college did not last beyond his departure in 1818, it numbered among its graduates Basil Manly, Sr., and Richard Fuller, two who took over the mantle of leadership among Southern Baptists after Brantly's death. After his stint in Beaufort and the death of his wife, Brantly returned to Augusta, where he served the church he had previously organized and resumed the rectorship of Richmond Academy.

In 1826 Brantly was invited to become pastor of perhaps the largest Baptist church in America, First Baptist in Philadelphia, recently left vacant by the death of Henry Holcombe. In Philadelphia he made a national name for himself as a preacher and editor. Many of his sermons were published individually, and he published a large volume of Sermons in 1837. He took over the sagging Columbian Star, the national Baptist weekly; renaming it the Christian Index, he managed it successfully until 1832, when, as a result of his heated endorsement of South Carolina in the Nullification controversy, he lost the bulk of his northern readers. Although he gave up the newspaper in 1833, he remained in Philadelphia until 1837, apparently as popular as ever with his parishioners. When his health failed that year, he was offered the pastorate of First Baptist in Charleston, S.C. Not content with a full-time pastorate alone, he accepted first the editorship of the Southern Watchman and General Intelligencer and then the presidency of the College of Charleston in 1838. Relinquishing the paper, he served his dual functions as minister and college president quite well until July 1844, when he suffered an apparent stroke that left him totally paralyzed and senseless until his death in Augusta, Ga., eight months later.

Following the death of his first wife, Brantly married Mrs. Margaret Joyner of Augusta in 1819. To the first marriage was born William Theophilus (1816–82) and to the second John Joyner (1821–1902). Both men became widely known Baptist clergymen in their own rights.

Cathcart, William, ed. The Baptist Encyclopedia: a Dictionary of the Doctrines, Ordinances, Usages, Confessions of Faith, Sufferings, Labors, and Successes, and of the Gerneral Hisotry of the Baptist Denomination in All Lands. Philadelphia: Louis H. Everts, 1881. https://archive.org/details/baptistencyclope02cathuoft (accessed February 15, 2019).