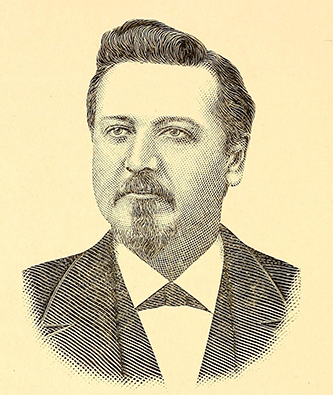 John Bruce Brewer, pioneer in the field of higher education for women, was born in Wake Forest, the oldest of ten children born to John Marchant and Ann Eliza Wait Brewer. John Marchant Brewer, a merchant-planter whose home was originally in Nansemond County, Va., had settled in Wake Forest after attending Wake Forest College from 1838 to 1840. The Brewer ancestry has been traced to one Thomas Brewer of Somerset and London, England, whose son, John settled in Warwick County, Va., before 1629. Ann Eliza Brewer, daughter of Samuel Wait, first president of Wake Forest College, traced her ancestry through the Wait, Merriam, and Conant families of early New England.

Brewer probably received his earliest education under the tutelage of professors at Wake Forest College and under the care of his grandfather, Samuel Wait. He attended Bethel Hill Academy in Person County for at least one year and then served with the Second Regiment, North Carolina Junior Reserves, from May 1864 to May 1865, seeing action in the battles of Kinston and Bentonville. He entered Wake Forest College upon being mustered out of the military, subsequently receiving both the B.A. (1868) and M.A. (1871) degrees.

For the greater part of the next half century, following graduation from Wake Forest, Brewer's life was devoted to educational interests. He served as teacher in Maple Springs Academy, Franklin County, 1868–70; coprincipal of Wilson Collegiate Institute, 1870–75; principal, Wilson Collegiate Seminary for Young Ladies, 1875–81; principal, Chowan Baptist Female Institute, 1881–96; principal, Franklin Female Seminary, Franklin, Va., 1901–7; and president, Roanoke Institute (now Averett College), Danville, Va., 1907–14. His service to higher education was completed with his election to the presidency of Chowan College, where he remained from 1918 to 1920.

Following his brief teaching experience at the Maple Springs Academy, Brewer was associated with Sylvester Hassell in the operation of the Wilson Collegiate Institute, a coeducational school over which Hassell served as principal. This coeducational enterprise was abandoned in 1875, with Hassell continuing the operation of a school for boys and Brewer becoming principal of the Wilson Collegiate Seminary for Young Ladies. Thus began his career in the field of higher education for women.

Brewer's earlier tenure at Chowan Baptist Female Institute saw vast improvements in both the physical assets of the campus and the quality of its academic programs. In June 1886 he recommended the appointment of a "Standing Building Committee," with responsibility for the planning and constructing of additional buildings, repairs, and other improvements. . . ." In 1895 he initiated the process of securing a change of charter for the institute, whereby it could be approved and recognized for the granting of academic degrees. At the time of his departure in 1896, Chowan Baptist Female Institute was generally recognized as second to none in academic reputation among the collegiate institutes for young women in North Carolina.

Though he had been offered the presidencies of such schools as Baptist Female University (now Meredith College), Richmond Female Institute (now Westhampton College of the University of Richmond), and Stephens College, Columbia, Mo., Brewer chose to cast his lot with the Roanoke Institute in 1907. It was here that he did probably his most outstanding work as an educator and administrator. The academic program was upgraded significantly. Of equal significance for the future of the school was Brewer's success in relocating the entire campus on a more promising site within the city of Danville.

Returning to the presidency of Chowan College in 1918, Brewer found himself expected to deal with the financial aspects of the institution only, while the academic department was left entirely to the supervision of an academic dean. Ensuing difficulties between the two men led to the early resignation of the dean, while Brewer, at the behest of the trustees, agreed to continue in office until a suitable president could be employed.

A Democrat and a Baptist, Brewer took an active interest in the affairs of his church and denomination, especially in the work of educational institutions and in the Baptist Orphanage in Thomasville. His portrait was presented to Averett College in 1938.

Brewer died in Blowing Rock, where he had been vacationing with two of his daughters. His body was returned to Wake Forest for interment in the family burial plot in the town cemetery.