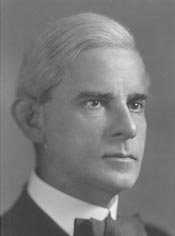 Samuel Mitchell Brinson, educator and congressman, was a native of New Bern. His father was William George Brinson (4 Jan. 1840–8 May 1896), a sergeant in Company K, North Carolina Regiment, Confederate States of America; his mother was Kittie Elizabeth Chesnut (14 Oct. 1842–42 June 1908), a daughter of Owen and Kezia Chesnut.

After attending private and public schools in New Bern, Brinson was graduated in 1891 from Wake Forest College. For a year he taught school in New Bern. In 1895 he was graduated in law from The University of North Carolina. Admitted to the bar the next year, he began the practice of law in his native town.

From 1902 to 1919 he was superintendent of public instruction in Craven County; the Brinson Memorial School in the county was named for him. In 1918 he was president of the Atlantic and North Carolina Railroad Company, which had been organized in 1854 at New Bern to operate trains from Goldsboro to the coast. He was long a devoted member and educational leader of the First Baptist Church of New Bern.

As a Democrat, Brinson was elected and reelected to Congress, serving from 4 Mar. 1919 until his death. He was buried at Cedar Grove Cemetery in New Bern.