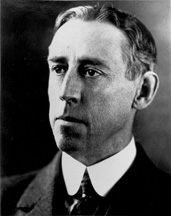 William Emerson Brock, U.S. senator from Tennessee and businessman, was born on a small tobacco farm near Mocksville, Davie County, the son of Richard Emerson and Mary Ann Howell Brock. With his three younger brothers and sister, he obtained his only schooling at a one-room, one-teacher school near his father's farm. His father's death ended Brock's formal education, and at age sixteen he became the family's breadwinner. Six years later he was hired for thirty dollars a month by a store in Winston-Salem. In 1896, R. J. Reynolds hired him as the first salesman for his rapidly expanding tobacco company. Brock's fortunes flourished with the company's, and he was soon named southern sales manager, with headquarters in Chattanooga, Tenn. In 1909 he purchased a small candy manufacturing company in Chattanooga, which he eventually developed into one of the largest of its kind in the South. Three years later he was elected president of the Chattanooga Chamber of Commerce.

Brock's first experience in politics came in 1912, when he managed the successful campaign of a Democratic candidate for Congress. The two succeeding campaigns he headed for the same candidate were also successful. Later, he managed campaign activities in the Chattanooga area for Governor Austin Peay. In 1929, Governor Henry Horton named him to serve out the unexpired term of Senator Lawrence D. Tyson, and in 1930 he was elected for the short term from November to March 1931. He did not run again. While in the Senate, Brock played a significant role in the passage of the Rivers and Harbors Bill, which provided for nine dams on the Tennessee River for navigation and flood control. He strongly supported the Muscle Shoals Development in Alabama, the predecessor of the Tennessee Valley Authority.

In 1940, Brock resigned as president of the Brock Candy Company and became chairman of the board. His son succeeded him as president of the family business. In addition to his business activities, Brock was well known for his endeavors in behalf of religious and educational institutions. He was delegate to the general conference of the Methodist church for twenty-five years and served as president of the Holston Conference Board of Church Extension for fifteen years. In the latter capacity he helped raise funds for the building of twenty churches in the Chattanooga area. He served as a trustee at Emory University in Atlanta, Emory and Henry University in Emory, Va., Martha Washington College for Girls in Fredricksburg, Va., and the University of Chattanooga. At the latter institution, he was chairman of the executive committee and largely responsible for the school's postwar building program.

In 1903, Brock married Marian Acree of Clarksville, Tenn., the daughter of a Baptist minister. The couple had two sons, William Emerson, Jr., and Richard Acree.