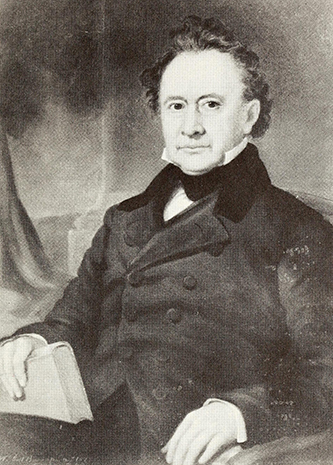 John Herritage (Heritage) Bryan, lawyer and congressman, was born in New Bern, the son of James (1776–1806) and Rachel Heritage Bryan. He attended New Bern Academy, received the bachelor's and master's degrees from The University of North Carolina (1815 and 1820), studied law, and was admitted to the bar in 1819. On 20 Dec. 1821 he married Mary Williams Shepard, daughter of a New Bern merchant. He served as a member of the state senate in 1823 and 1824. In the latter year he worked for the ticket of Jackson and Calhoun, against that of W. H. Crawford.

In 1825 he defeated Old Republican Richard Dobbs Spaight in the election to represent the New Bern District in Congress. He was reelected without opposition in 1827. While in Washington, he was a steady supporter of the policies of President John Quincy Adams. He served in the House on the committees on Elections, the District of Columbia, and Roads and Canals. After the election of Jackson in 1828, Bryan declined to run for Congress again. When he returned home, he was active in opposition to Jackson and in the organization of the Whig party in his area.

After a decade of strenuous professional practice in the tidewater section, Bryan's health began to fail, and during the winter of 1828 he moved to Raleigh. Here he gradually abandoned his law practice but continued a busy life. He played a role in the affairs of the Whig party before the Civil War and was opposed to secession in 1860. He was an active Episcopal layman and during the fifties was secretary of the state Agricultural Society. In 1847 he was a member of the committee that welcomed President Polk to Raleigh. He was interested in internal improvements. For forty-five years he was trustee of The University of North Carolina, and for many of these years he served on the executive committee.

Bryan and his wife had a family of fourteen children. Seven of the sons graduated at Chapel Hill. One son, George, a captain in the Confederate service, died defending Richmond in 1864.

The war did great harm to the family business interests, and Bryan's health declined rapidly after 1868. He died in Raleigh and was interred in Oakwood Cemetery.