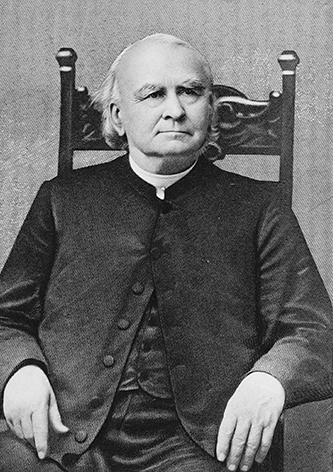 Jarvis Buxton, Episcopal clergyman and educator, was born near Washington, N.C., the son of the Reverend Jarvis Barry Buxton, also an Episcopal minister. A few years later his father became rector of St. John's Church, Fayetteville, and young Buxton was reared there. After primary education at home, he attended the school at Flushing, Long Island, run by Dr. William Augustus Muhlenberg. This institution had been proposed as a model by Bishop Levi Silliman Ives for the Episcopal School for Boys in Raleigh, established in 1833. The Reverend Mr. Buxton, Sr., was on the committee for the establishment of the Raleigh school at the convention of the diocese in 1832.

Jarvis Buxton, Jr., was graduated from The University of North Carolina in 1839; his commencement speeches during his college years reflect an interest in political science. Having decided to become a clergyman, he was graduated from the General Theological Seminary in 1842. In 1846 he was in charge of the school at the Valle Crucis Mission, established by Bishop Ives and opened in 1845. Here he was ordained deacon by Bishop Ives in the chapel of the institution at Valle Crucis, 1 Aug. 1847. He was ordained priest by the same bishop at St. John's Church, Rutherfordton, on 17 June 1849 and continued as rector there until 1851. In that year he went to Asheville and established Trinity Church.

In 1854 the convention of the diocese of North Carolina, not discouraged by the failure of the school in Raleigh, authorized the establishment of a school for boys in Pittsboro. Funds were raised, and Buxton was elected principal. He accepted with reluctance, but when his parishioners at Trinity Church promised to establish a school in Asheville, the diocese abandoned the plan for the Pittsboro School. Ravenscroft School in Asheville was opened in 1856 under Buxton's guidance and was successful for many years. Buxton was one of the first missionaries west of the Blue Ridge and in addition to Trinity Church, Asheville, he established missions throughout the mountain country. In 1891, after a ministry of forty-five years, Buxton (by then holding a D.D. degree) resigned the rectorship of Trinity Church and moved to Lenoir. There he was rector of St. James Church until 1900. He died in Asheville.

In 1852, the year after the death of his father, Buxton published an edition of the elder Buxton's sermons. At the 1890 convention of the diocese of North Carolina, held in Tarboro to celebrate the centennial of the first attempt to establish the diocese, he read a paper entitled "Missionary and Educational Enterprises," which was incorporated in Sketches of Church History, by J. B. Cheshire, Jr.

On 6 Jan. 1848 in Fayetteville, Buxton married Anna Nash Cameron, the daughter of Judge John A. Cameron of North Carolina and Florida. Mrs. Buxton died 30 June 1896. Dr. and Mrs. Buxton had eight children, of whom five survived their parents.

M. DeLancey Haywood, Lives of the Bishops of North Carolina (1910).

Protestant Episcopal Church in the U.S.A., Journal of the Eighth Annual Convention of the Missionary District of Asheville (1902).

Slusser, Dale Wayne. The Ravenscroft School in Asheville: A History of the Institution and Its People and Buildings. McFarland, 2013. http://books.google.com/books?id=bYMoAQAAQBAJ&source=gbs_navlinks_s&printsec=frontcover#v=onepage&q&f=false (accessed December 12, 2013).