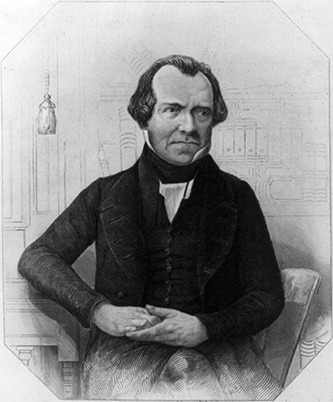 Churchill Caldom Cambreleng, congressman and diplomat, was born in Washington, Beaufort County. Little is known of his family except that one brother became an attorney in New York and another a naval officer. He attended school in New Bern and clerked in a store there before moving to New York City in 1802. He resided in or near New York City for the remainder of his life, except for a brief residence in Providence, R.I., in 1806, when he held a position as clerk in a financial institution there. Returning to New York, he became associated with John Jacob Astor in mercantile pursuits and traveled abroad extensively as one of Astor's representatives. He was also engaged in several other businesses and served as the principal officer of Cambreleng and Chrystie and of Cambreleng and Pearson. He was involved in railroad construction and, as the first president of the Saratoga and Schenectady Company when it was incorporated in 1831, was responsible for supervising the construction of this successful line in upstate New York. He was one of the first directors of the Farmers Fire Insurance and Loan Company.

Cambreleng was elected to Congress in 1820 as a Democrat and served until he was defeated in 1838. He soon became one of the major leaders of his faction and, with the election of Andrew Jackson, became one of the administration's principal spokesmen in the House of Representatives. The election of Martin Van Buren, a fellow New Yorker, further enhanced Cambreleng's influence. An effective politician and public speaker, he seldom revealed whether he spoke for himself or for the administration, and his speeches were often interpreted as representing the president's position. As chairman of the committees on Ways and Means, on Commerce, and on Finance, he was instrumental in formulating a large number of bills reaching the floor of Congress. He supported Jackson on the controversial U.S. Bank and in 1837 introduced legislation to abolish some tariff duties and greatly reduce others. Designed to dismantle Clay's American System, Cambreleng's proposed legislation was seen as indicative of the direction to be taken by Van Buren's new administration. His attitude was consistent with his own political past, however, for he had vigorously opposed the tariffs of 1824 and 1828. Though seldom considered an original thinker, he was admired for his common sense and clarity of expression, and several of his speeches and reports were published and widely circulated. His report as chairman of the Committee on Commerce and Navigation, published in 1830, was issued in several editions and reprinted in London for circulation abroad. After his defeat in 1838, he returned to private life until May 1840, when Van Buren wrote to ask him to go to Russia as minister. Cambreleng held this post until July 1841, when he was replaced by the new administration.

Though holding no other major office, he continued to be active in the affairs of his party on both state and national levels. He represented Suffolk County at the state constitutional convention of 1846 and, as chairman of the convention's Committee on Currency and Banking, prepared an important report on the need for a sound currency. In 1848 he attended the Democratic convention in Baltimore as a member of one of the two delegations sent from New York State. As a partisan of Van Buren, he was affiliated with the "Barnburners" of his state, opposing the rival faction in his party, known as "Hunkers." Upon the nomination of Lewis Cass, Van Buren's supporters returned to New York and at a meeting in Utica reaffirmed their support for their candidate. Cambreleng joined in the movement to nominate Van Buren and supported the Free-Soil party in the presidential campaign of 1848 when it selected Van Buren as its nominee. He returned to the Democratic fold in 1852, however, and supported the candidacies of Franklin Pierce for president and Horatio Seymour for governor.

Retired from active business pursuits, Cambreleng grew increasingly inactive after the campaign of 1852. His mercantile career had provided him with a comfortable income, and as he grew older he spent more time at his home in West Neck on Long Island. He was married to a former Miss Glover, but his later personal affairs, like his early life, are poorly documented. He had no children. He died at his home and was buried in Greenwood Cemetery in Brooklyn.

DeAlva Stanwood Alexander, A Political History of the State of New York, vol. 2 (1906).

Cambreleng's published reports and pamphlets, for his political ideas.

Mephistopholes [Kennedy, John Pendleton]. A Review of Mr. Cambreleng's Report from the Committee of Commerce: In the House of Representatives, at the First Session of the Twenty First Congress. Baltimore, Md.: Wm. Ogden Niles, 1830. http://books.google.com/books?id=vCk5AAAAMAAJ&source=gbs_navlinks_s&printsec=frontcover#v=onepage&q&f=false (accessed July 9, 2013).