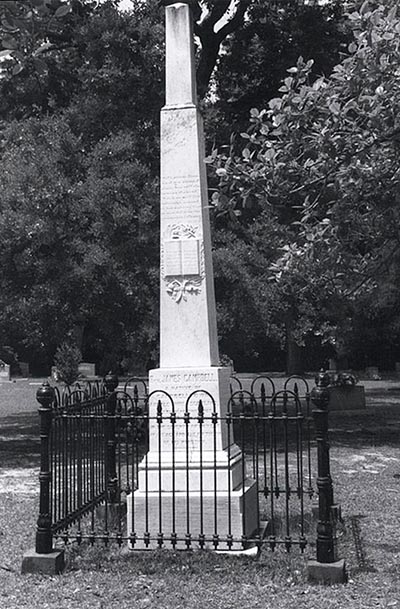 James Campbell, Presbyterian minister, was born at Campbelltown, Kintyre, Scotland, and emigrated to Pennsylvania in about 1730. He was licensed to preach by the Presbytery of New Castle in 1735 and transferred to the Presbytery of Philadelphia on 22 May 1739. In September of that year he became uncertain of his own personal salvation and ceased to preach. On 29 Nov. 1739, in this condition, he heard the famous English evangelist George Whitefield preach at Gilbert Tennent's Meeting House, New Brunswick, N.J., and sought an interview with him. Whitefield managed to remove his difficulties and encouraged him to resume his ministry.

In 1755, Campbell was visited by the Reverend Hugh McAden, who was on his way to North Carolina to ascertain the religious needs there and report back to the Synod of Philadelphia. Upon his return, McAden persuaded Campbell to settle among the Highland Scots in the Cape Fear Valley and minister to them in their native Gaelic tongue. Campbell did as suggested in 1756 or 1757, taking up land on the Cape Fear River near the present-day town of Linden. From there he served a vast area covering most of the present counties of Cumberland, Harnett, Hoke, and Lee, with occasional side visits to Raft Swamp in Robeson, Purity in South Carolina, and "other destitute settlements." He was the only minister to preach to the Scots in their Gaelic tongue until the coming of John Bethune and John MacLeod in about 1773. He organized the present-day Barbecue Presbyterian Church near Broadway, Bluff Presbyterian Church near Wade, and Longstreet Presbyterian Church (now discontinued) at Fort Bragg.

The American Revolution divided the Highland Scots of North Carolina. For the most part, the older settlers were Patriots, the more recent ones Loyalists. One Sunday morning at Barbecue, Campbell forgot his congregation and prayed for the success of the American arms. After the service he was approached by an old Tory Scot, McAlpin Munn, who said, in effect, "If ever you pray again as you did this day, the bullet is molded and the powder is in my horn to blow it through your head." Campbell for the second time quit the ministry. A few weeks later, however, he happened to overhear an elderly woman cursing and was shocked. When he rebuked her, she replied, "Is it any wonder the devil can make the mouth of the woman to swear when he can stop the mouth of the minister?" Her words moved him to resume the ministry, but this time in Guilford County, a safe distance from McAlpin Munn and his bullet mold and powder horn.

In 1780, feeling his life fast drawing to a close, Campbell returned to his home on the Cape Fear. He was buried on his own land, on a bluff overlooking the river.