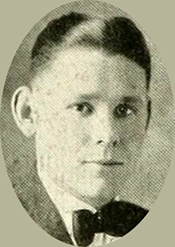 Frank Ertel Carlyle, congressman and lawyer, was the second son and third child of William Watts and Lillian Ottelia Vampill Carlyle. He was born in Lumberton and educated in local schools and at the Wilson Memorial Academy, Nyack, N.Y. He entered The University of North Carolina in 1916, but enlisted in the U.S. Navy in June 1918, serving the remainder of the year. He returned to the university and upon graduation was licensed to practice law in January 1921; he opened an office in his native town.

Carlyle was married to Lois Godwin Caldwell in 1927, and they were the parents of a daughter, Mrs. Doran Berry. At his death in 1960 he was buried in Meadowbrook Cemetery, Lumberton.