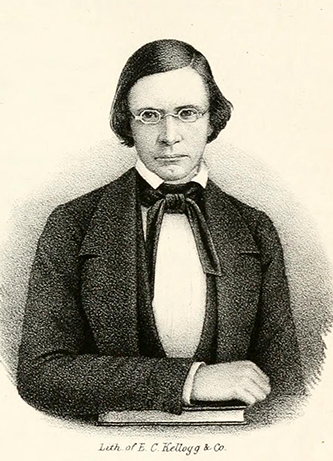 Robert Hett Chapman, Presbyterian minister and missionary and second president of The University of North Carolina, was born in Orangedale, N.J., the second of the three children of the Reverend Jedediah Chapman (27 Sept. 1741–22 May 1813) of East Haddam, Conn., and his first wife, Blanche Smith (d. Nov. 1773). The elder Chapman, a "warm" Whig during the Revolution, lived very close to the contested New Jersey battleground area and served occasionally as army chaplain. Robert Hett attended Nassau Hall (Princeton) as a pupil of Dr. John Witherspoon and in 1789 was graduated with a B.A.

After a year spent in "judicious reading," Chapman found himself deeply impressed with religion. "His convictions of sin were deep and pungent; his sense of hardness of heart and deep defilement, acute," his son wrote many years later. After some three years spent in a theological course, Chapman served briefly as instructor at Queen's College, New Brunswick, N.J. He was licensed to preach the Gospel on 2 Oct. 1793 and was installed as pastor of the Presbyterian church of Rahway, N.J., on 5 Jan. 1794. Three years later, on 14 Feb. 1797, he married Hannah Arnett, daughter of Isaac Arnett of Elizabethtown and the formidable revolutionary heroine Hannah Arnett. About 1805 the Chapmans removed to Cambridge, N.Y., where Robert Hett served the Presbyterian church until sometime in 1812.

Early in 1812 the trustees of The University of North Carolina, through their Committee on Appointments, offered Chapman the presidency of the university at a salary of twelve hundred dollars. Chapman's name had almost certainly been put forward by the university's first president, Dr. Joseph Caldwell, himself a Princeton graduate and a Witherspoon man. Caldwell had wished to be relieved of the presidency to become professor of mathematics and return to his prime interests, geometry and astronomy. Chapman's letter of acceptance, dated 12 Feb. 1812, emphasized his reluctance to abandon the ministry but stated frankly that his current pastor's salary was "utterly inadequate to the expense of a growing family." Another factor influencing his acceptance must have been the presence in nearby Hillsborough of a sizeable colony of Arnetts and Kollocks, including various Princeton graduates, all centered about the home of Frederick Nash and his wife, Mary Goddard Kollock, who was Hannah Chapman's niece. For the next several years, the entire Chapman family was to find a second congenial home in Hillsborough.

The brief Chapman administration has very generally been regarded as a failure, even a near-disaster, in university annals, but the Reverend Robert Hett Chapman, Jr., in his sketch of his father entitled "Life of Rev. Robert Hett Chapman Written by His Son . . . Talladega, Alabama" (ca. 1853–54), pictures it as a glowing missionary success with no hint of student turbulence or dissatisfaction. The younger Chapman states that his father, on arriving in Chapel Hill, found "the state of literature low and the pulse of piety lower still. In fact, the seat of the University itself was a moral desolation . . . little even of the form of religion was seen in all that region."

Kemp P. Battle stated in his History of the University of North Carolina that some of Chapman's troubles stemmed from the extremely hot, partisan spirit engendered by the War of 1812. It was "a fatal obstacle," says Battle, that "he was a Peace Federalist and his students were in favor of the war. . . . To the minds of most Americans the word Federalist became synonymous with traitor. . . . Dr. Chapman was too honest to conceal or tone down his views." In January 1814 there occurred various nighttime depredations at the president's home—a gate taken down, a cart carried away, a small house knocked over. Later a student publicly defied Chapman in delivering the whole of a censored oration. Both he and his prompter refused to halt or sit down—and were cheered. Chapman's gatepost was tarred and feathered, a charge of gunpowder was placed in the doorknob of a tutor's door, dirks and pistols made their appearance, and the Grove (the campus of great oaks) was seriously damaged by lawless rowdyism. Various students were suspended, and the university's academic routine was shattered. Public opinion, including that of some of the more weighty trustees, adjudged Chapman a poor disciplinarian who had lost control.

The Chapmans themselves had suffered a series of family losses during their months in Chapel Hill. Last and most tragic was the death on 25 Nov. 1814 of their eldest surviving child, a fifteen-year-old daughter, Margaretta Blanche (b. 26 Oct. 1799), named for both Chapman's mother and his stepmother, Margaretta Le Conte. She was buried in the oldest section of the old Chapel Hill Cemetery.

On 23 Nov. 1816, Chapman "in solemn form" submitted his letter of resignation to the university trustees to take effect at the end of 1817. The trustees, however, accepted it to take effect immediately, paid Chapman a half year's salary, and allowed him the use of his house until the end of the next session. On 26 Dec. 1816, they reelected Joseph Caldwell president.

Battle's opinion that Chapman's defects "have been somewhat exaggerated" would seem to suggest simply that his interests and training did not fit him to be a university administrator. As a Presbyterian minister, he accomplished an impressive amount of solid, lasting mission work in the area. His zealous preaching in Hillsborough sparked an enthusiastic religious awakening that resulted in the building of the brick Presbyterian church (1815–16), the first church to be erected there since before the Revolution. "He was more highly gifted with power on his knees than any man I know," said Frederick Nash. "His public prayers warmed the hearts of all who heard them." Chapman organized a Presbyterian church in Chapel Hill; converted various students, notably John Knox Witherspoon; installed the Bible in the university and the catechism in the University Grammar School as textbooks; organized a chapter of the American Bible Society at Raleigh, as well as the Presbyterian Missionary Society of North Carolina; and generally proved himself a recognized leader in North Carolina Presbyterian circles. In 1815, Williams College, Williamstown, Mass., conferred on him the D.D.

On leaving Chapel Hill, Chapman went as pastor to the Presbyterian church in Leesburg, Loudon County, Va., and then to the pulpit of the Presbyterian church at Winchester, Va. After a decade in the Shenandoah Valley, he decided to emigrate West, spent a year or so in the North Carolina hill country in preparation, and finally in 1829 migrated entirely across Tennessee to Covington in Tipton County, a frontier presbytery.

In the spring of 1833 he journeyed by horseback to attend the General Assembly of the Presbyterian Church in Philadelphia. On his return, he stopped at Winchester at the home of his son-in-law, Thomas Allen Tidball, Esq., where he died unexpectedly of an intestinal ailment. He was buried in Winchester. Besides his wife, Hannah, he left seven surviving children (five had died earlier). Mrs. Chapman died in St. Louis, Mo., on 7 July 1845, at the home of her third son, Edward H. There is a framed silhouette of Chapman in the North Carolina Collection, University of North Carolina, Chapel Hill.

Archibald Henderson, The Campus of the First State University (1949).