Beatrice Cobb, newspaper editor and publisher and Democratic party leader, was born in Morganton, the eldest of six daughters of Theodore Gettys and Martha 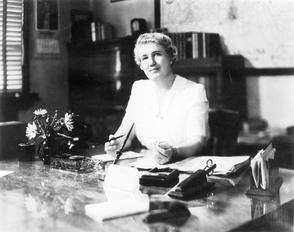 Kincaid Cobb. Educated first in the local schools, she enrolled at Asheville Normal School in 1907 and was graduated in 1909. She taught school in Hickory from 1909 to 1913, when she returned to Morganton to begin a newspaper career on the News-Herald , becoming owner and publisher at the time of her father's death in 1916. She also established the Valdese News in 1938.

One of the pioneer women leaders in the North Carolina Press Association, she served as its secretary-treasurer from 1922 until her death. From 1934 until 1952 she held the office of Democratic national committee-woman from North Carolina. She gained distinction in national Democratic circles and was the only southerner on the five-member committee to advise President Franklin D. Roosevelt in 1940 on a successor to James A. Farley, party chairman. Beginning in 1928, she was a delegate to several Democratic National Conventions.

The University of North Carolina awarded her an honorary LL.D. in 1949. She was a Methodist and an honorary member of the Morganton Kiwanis Club. Many of her writings dealt with her world travel experiences; after she became ill with acute leukemia she took a month's trip to Europe, from which she returned to enter Duke Hospital in Durham, where she died.