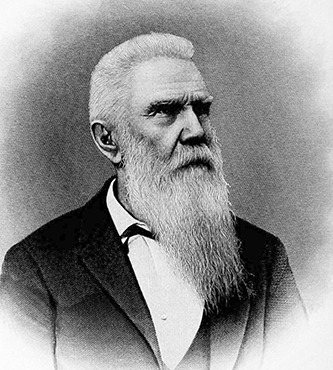 Stephen William Cole, planter and banker, son of William Terry and Judith Moseley Leake Cole, was born in Fayetteville. His father, a soldier of the War of 1812, was a member of the Fayetteville Light Infantry stationed at Wilmington. He died of yellow fever there at the age of twenty-six. Stephen's mother removed to Rockingham, a town built on a site donated by Stephen's great-grandfather, who came from Pennsylvania in about 1750.

At eighteen, Stephen Cole married Tabitha Randall Ledbetter, a daughter of a Methodist minister. Soon afterward they purchased a large plantation, Rural Retreat, six miles from Wadesboro. Inheritance of a large estate and devotion to business helped Cole to secure a prominent position in the community. He became a major in the county militia, and friends thereafter called him Major Cole. Appointed chairman of the county court and of the board of county commissioners, he also organized the first bank of Wadesboro in 1850. In 1852, a new home was built for him four miles from Rural Retreat in Ansonville, where he helped in establishing a college for young women, Carolina Female College. It was in operation from 1850 until 1867, when war and fever resulted in its decline.

Cole bought land in Florida and Arkansas with the idea of establishing colonies for his slaves. Florida proved undesirable, but one of his servants remained in Arkansas twenty-five years after the Civil War. Cole was overage for any military service in the war but gave aid to the needy and held his local positions. Although the war left him poor, his rare business tact and good judgment helped him to renew his old pursuits.

On 17 Sept. 1858, Cole's wife died. He returned to Rural Retreat with one daughter, while the other two married and moved to Salisbury. He joined them there eleven years later with a new bride, Sallie Farrer Shelton of Louisa County, Va. With his past financial experience, Cole founded the First National Bank of Salisbury in 1883. He was named president and held that position until his death. In 1887 he aided in the establishment of a cotton factory in Salisbury.

Cole was deeply interested in helping young men get a start in the business world. He was a consistent member of the Methodist church and spent many of his leisure hours reading. The bank, to which he gave untiring attention, was the pride of his later days.