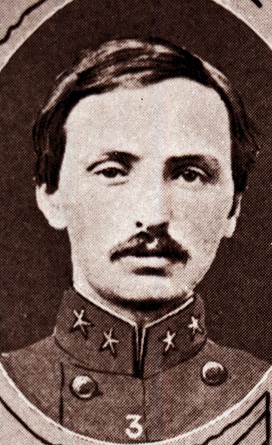 Thaddeus Charles Coleman, a Confederate Army engineer colonel and resident engineer for the completion of the Western North Carolina Railroad, was born on his father's farm seven miles north of Asheville near Weaverville. He was the son of William Coleman, a native of Cabarrus County, and of Ann Evelyn Baird of Buncombe County. His father for a time was postmaster at Asheville; Thaddeus and his brothers became Confederate officers and professional men. Thaddeus was prepared for college by Colonel Stephen Lee, a West Point graduate, and entered the junior class at The University of North Carolina. After his graduation he remained as a tutor in mathematics in 1856–57, but shortly afterward he became a civil engineer with the Western North Carolina Railroad, then under construction from Morganton to Asheville.

At the beginning of the Civil War, Coleman became a first lieutenant in the Tenth North Carolina Regiment; by the end of the war he was a lieutenant colonel with the Fifty-eighth Regiment. He served in 1862 under Confederate chief engineer Brigadier General Jeremy F. Gilmer in building defense earthworks near Petersburg, Richmond, Charleston, and Savannah. On General D. H. Hill's transfer to North Carolina, Coleman saw combat duty near Goldsboro and Washington. When he served on Hill's staff at Chickamauga, his gentle manner coupled with bravery under fire drew favorable comment. He supervised construction of earthworks for the retreat of General Albert S. Johnston's army and later at Bentonville led one of the last gallant charges as a combat colonel.

At the end of the war, Coleman returned home, married Mary Elizabeth Sloan of Greensboro, and continued living on the family farm north of Asheville. The Colemans' daughter Sarah married William Sydney Porter of Greensboro, better known as the writer O. Henry. Other children were Evelyn, who married William Coleman, and James Sloan, who remained on the family farm and reared a family of three children.

In 1866, Coleman was assistant engineer on the Charleston, Cleveland, and Cincinnati Railroad, with headquarters at Morristown, Tenn. In 1868 he returned to North Carolina as assistant engineer for the Western North Carolina Railroad's Blue Ridge section. In 1871 he became chief engineer for this project, charged with changing the intricate location on the face of the Blue Ridge east of Swannanoa Tunnel. In 1874 he was chosen chief engineer of the Spartanburg-Asheville line and surveyed locations for climbing the Blue Ridge. He advised a longer route around Tryon Mountain, but shortage of funds dictated the steeper grade over Saluda Mountain.

Under the pseudonym Winstanley, Coleman published a volume of poems, The Land of the Sky, which he inscribed to Christian Reid. This twenty-two-page pamphlet, with no indication of its date, was printed in Asheville.

A few years before his death, Coleman retired to his birthplace; he was buried in the family cemetery there.

Sondley Collection (Public Library, Asheville), for statement of A. C. Avery and quotations from Asheville and Greensboro newspapers.