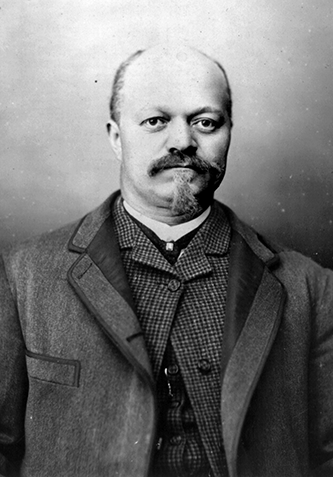 Warren Clay Coleman, manufacturer, was the illegitimate son of Rufus Clay Barringer, afterward a Confederate general, and Roxanna Coleman, a slave owned by Daniel Coleman, Sr., of Concord. Prior to her marriage to John F. Young, a household slave and blacksmith, Roxanna had two sons, Thomas Clay and Warren Clay, by Barringer. A third illegitimate son, Joseph Smith, followed Roxanna's break with Barringer. When slaves married, it was generally accepted that the man's master would purchase the woman; contrary to this usual practice, Roxanna's husband became a slave on the Coleman estate, and the black family was maintained there as a unit. Barringer was the descendant of French Huguenots who migrated from France during the early seventeenth century to England and Germany. His grandfather, John Paul Barringer, settled in Dutch Buffalo Creek, now a part of Cabarrus County. Rufus Barringer attended The University of North Carolina, read law under Chief Justice Richmond M. Pearson, and represented Cabarrus County in the House of Commons from 1848 to 1850. He provided inspiration and financial assistance in Coleman's early business ventures and in his establishment of a cotton mill. He also guided Coleman's early development.

Coleman's first twenty-one years were consumed by a dull routine of slavery and farm work that constrained his highly motivated personality. During the Civil War, he worked for the Confederacy, making boots and shoes. With emancipation, he was bound to William M. Coleman, a Cabarrus planter-lawyer who later became North Carolina's attorney general. Coleman educated and trained young Warren until 28 Mar. 1870, when Warren was released. Warren went to Alabama for a year, seeking economic opportunity. He returned to Concord in 1871 and began his business career, starting as a collector of rags, bones, and junk and becoming one of Concord's richest merchants. From 1873 to 1874 he attended Howard University as a student in the Model School, preparing himself for business opportunities.

Coleman's first business was a combination barber shop and cake and candy store. Under his father's guidance, he bought land in the black areas of Concord and erected cheap frame rental houses. Between 1875 and 1904 he developed nearly one hundred rentals; he purchased four farms and a substantial number of city lots, thereby becoming one of Cabarrus County's largest property owners and most influential citizens.

In 1875, Coleman married Jane E. Jones. In 1879 he combined his two shops into a large general store that became one of Concord's major retail establishments. A proud and frugal man who sought wealth and fame, he extended his influence into North Carolina's black community. He was a member of the North Carolina Industrial Association, an African-American group seeking to develop African-American-owned businesses. He subsequently became the association's vice-president, treasurer, and president.

By 1895, Coleman was considered one of the South's richest African-Americans. He helped found the National Negro Protective Association and assisted African-American education at Howard University, Livingstone College, and Shaw University. He supported the North Carolina Oxford Orphans' Home and aided Professor R. M. Alexander in developing the Coleman School in Welford, S.C. His philanthropy extended to the Zion Hill Church and Price Memorial Temple in Concord.

Coleman's major contribution was his organization of Coleman Manufacturing Company, the nation's first African-American-owned and operated textile factory. In mid-June 1896 he tested the climate for a African-American-owned mill. Prominent white textile leaders, spearheaded by Washington Duke, supported his efforts. Coleman initially sought to raise stock subscriptions from African-American supporters, but they lacked the economic base to sustain such a venture, and he was forced to borrow from the Duke family. Initially, Coleman's venture enjoyed some success, but basic financial frailties and external market conditions overwhelmed the mill. The mill was underfinanced and opened with secondhand machinery. The ensuing results were predictable and were accelerated by Coleman's sudden death. Duke's notes matured, and the cotton mill was forced into bankruptcy. Coleman's dream, which had included plans for a African-American community to surround the manufacturing facility, generating African-American political power out of African-American capitalism, had ended. The mill operated for a brief period under white supervision but was sold at auction in late June 1904.