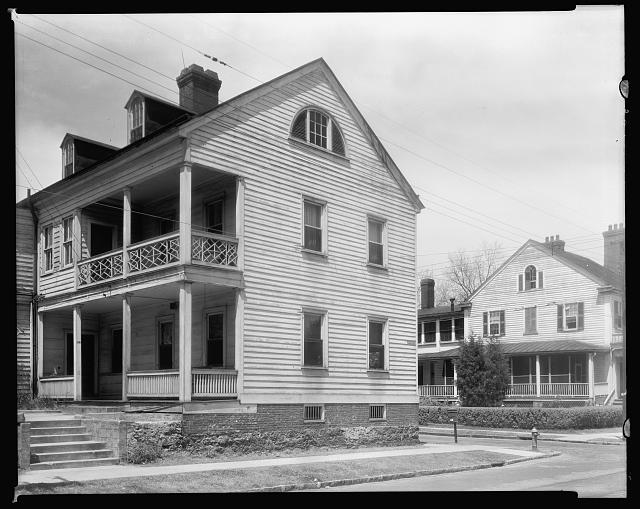 James Coor, naval architect, builder, and revolutionary leader, probably was born in England but apparently moved to North Carolina from the Eastern Shore of Maryland to serve as a naval architect at the invitation of Thomas Webber of Jones County, owner of land on Trent River as well as in New Bern. In New Bern Coor is said to have drawn plans for a house for Webber at 506 Craven St., as well as one for himself on the same street and for several other men. The Masonic Lodge and the New Bern Academy are also said to have been designed by him. Webber's and Coor's houses, the lodge and the academy still stand. His own house was built on a strong foundation of shell rock. A niece, Sarah Groendyke, stayed with Coor during his last years, and her husband, Benjamin Woods, joined her there after their marriage. In Apr. 1818 the dwelling was purchased from James Groedyke by William Gaston, who had his law office in the yard.

One James Coor was clerk of court in Craven County from 1737 to 1739, and by 1742 was married to Mary, youngest daughter of Thomas Smith of New River. The name of James Coor appears as witness to or executor of wills between 1743 and 1775, but it is not certain that this James Coor was the man of that name who was active during the Revolutionary War.

Coor was one of eighty-two subscribers to A Collection of All the Acts of Assembly, of the Province of North-Carolina, in Force and Use, Since the Revisal of the Laws in 1751 published in 1764 by James Davis and one of fifty-seven subscribers in North Carolina to John Hawkesworth's A New Voyage, Round the World, in the Years 1768, 1769, 1770, and 1771, under taken by . . . Captain James Cooke, printed in New York in 1774.

Coor served three terms in the colonial assembly representing Craven County between 1773 and 1775. In 1775 and 1776 he served on the New Bern Council of Safety and during the same years on the provincial council. He was also one of the county's delegates to the second, third, fourth, and fifth provincial congresses that met between 1775 and 1776. He was present at the adoption of the Halifax Resolves and at the drafting and adoption of the first state constitution. Between 1777 and 1787 he represented Craven County in the state senate for twelve sessions, serving as speaker during the 1786–87 session. In 1791–92 when he was the New Bern borough representative in the House of Commons he voted to grant financial aid to the new University of North Carolina. In December 1775 he was one of two men designated by the council to receive money for the completion of a fort on the Neuse River. In July 1776 he was appointed commissioner for the port of New Bern and apparently continued to serve at least until 1781, when he was referred to by Governor Richard Caswell as the Naval Officer of New Bern. Between 1792 and 1794 he was a member of the council of state and in 1792 was also a member of the New Bern town commission. He served the state as a commissioner of accounts and on one occasion in this connection he and his son Thomas were paid £144.9 for keeping accounts. The 1790 census records Coor living in a household that included two women and nine slaves. In October and November 1795 he advertised for a runaway slave who was described as "a good hand by water" and who might try to go to sea as he had done before. Coor presumably was dead by 1800 as his name does not appear in the census of North Carolina for that year.