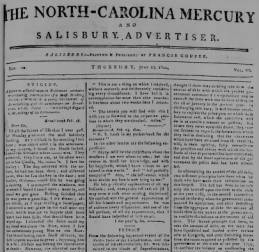 Francis Coupee, printer, was of French origin. He moved to Salisbury in the 1790s to open the first printing shop in Western North Carolina. He and John M. Slump set up the German-English Printing Office in 1797 in Salisbury, using the printing types, tools, implements, and press Michael Brown had purchased in 1794 from Benjamin Shoe of Shenandoah County, Va. In this venture, Slump and Coupee were apparently printers hired by Michael Brown, a planter and millwright by profession; in 1798 a work by the Reverend Samuel E. McCorkle, pastor at Thyatira Presbyterian Church, Rowan County, appeared with the imprint of Coupee and Slump at "Michael Brown's German-English Printing Office."

The shop was opened in 1797, when McCorkle had one of his sermons printed by Coupee; Abraham Hodge, printer at Halifax, had printed McCorkle's earlier sermons. The Moravians at Salem took notice of the printshop and recorded in their diary under the date 23 Jan. 1798, "A book printery has been established in Salisbury and it is suggested that in future we might have our festival odes printed there." Coupee assumed control of the office by 1800, when Slump moved to Lincolnton and Brown's name ceased to appear on the title pages of books published in Salisbury. Coupee's printing office issued religious tracts by McCorkle, the Reverend James McRae, and the Reverend Robert Johnston Miller, besides a Collection of Songs for the German Communities in North Carolina. In 1799 and in 1800, Coupee published the North Carolina Almanac for 1800 and 1801, respectively.

In May 1798, Coupee began the first newspaper in his section of the state, printing the first issue of the North Carolina Mercury and Salisbury Advertiser. Slump was not connected with Coupee in this venture, though the two names appeared in the imprints of pieces from the office from 1797 to 1799. The newspaper was published weekly until 1802, when it was discontinued.

Coupee carried on the printing business alone from 1800 until 1811, when Jacob Krider, a native of Salisbury, became his associate. Together they published many books on religion, one of the last being Poor Peter's Call to His Children by Peter Clemmons (1812).

Coupee apparently made money in his venture, for by 1801 he purchased one third of lot 2 in the east square of Salisbury, one of the more desirable business lots in the town. He acquired in the same year fourteen acres on the main Yadkin River and in 1806 seventy acres on Grants Creek. In 1811 he purchased two more lots in Salisbury on the edge of the business section.

He was a prominent Mason in the old Cone Lodge in Salisbury and solicited help from a brother Mason, General John Steele, in winning an appointment as clerk for the county of Rowan. The printing business must have been slack at this time (1809): "Nothing but want of employment in my professional business . . . could have compelled me to address you," he wrote.

Coupee was buried in the old Lutheran Cemetery in Salisbury. He was survived by his widow, Margaret; three sons, Charles, Francis, and John; and three daughters, Evelena, Mary, and Sally (who married William Cooper on 12 Apr. 1827). His business partner, Jacob Krider, was appointed guardian for Coupee's orphaned children. His widow married Thomas Holton on 8 Aug. 1817.