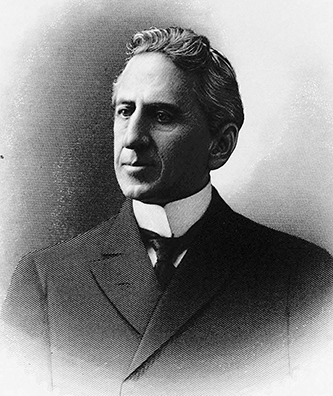 Leonidas Wakefield Crawford, Methodist minister, professor of theology at Trinity College, and editor of the North Carolina Christian Advocate, was born on the family plantation just east of Salisbury, the fifth son of William Dunlop Crawford and Christiana Mull Crawford. His father was an honor graduate of The University of North Carolina, a Salisbury attorney, and long-time legislator from Rowan County. His mother was a member of an old Rowan family and had attended Salem Academy.

When Leonidas was two years old, his father died, and when he was twelve, his mother remarried. He spent some of his formative years in Charlotte, a favorite of his stepfather, Peter Brown, Esq. When the Civil War broke out, he was sent to Olin High School, a Methodist Institution in northern Iredell County, in an attempt to get him away from secession enthusiasm. The plan did not succeed: six months later he was allowed to join the infantry company of one of his brothers as a junior officer in the Forty-second Regiment. He served with distinction until he was taken prisoner at Second Cold Harbor near Richmond.

His imprisonment until the end of the war gave him time to study, and after he was paroled, he went back to Olin and then to the University of Virginia, where he was graduated in English and Moral Philosophy and afterward received a master's degree. Later he received honorary D.D. degrees from Central College in Missouri and Weaverville College in North Carolina.

Crawford's family background was Methodist, and his training turned him to the ministry of the Methodist church. In 1867 he was licensed to preach, and in 1868 he joined the North Carolina Conference of the Methodist Episcopal Church, South. From the first his appointments were to the larger churches—Hillsborough, Salisbury, Fayetteville, Greensboro, New Bern—and he spent in each the four years allowed by Methodist policy.

Crawford's interest in education was strong. In 1883, while pastor of West Market Street Church in Greensboro, he headed a movement to save Greensboro Female College for the Methodist church, and he helped secure the state Normal and Industrial College at Greensboro. While editor of the North Carolina Christian Advocate, he established the small chapel that has grown to be College Place United Methodist Church, just off the campus of The University of North Carolina at Greensboro; he was its pastor for four years. He became professor of theology at Trinity College in 1890 and held that position for four years, while Trinity was being moved from Randolph County to Durham. Lack of funds caused his department to be abandoned, and he went back into the itinerancy. At about that time, John Crowell resigned as president of Trinity College, and there was considerable sentiment for Crawford to be made president in his stead. The trustees, however, chose John C. Kilgo of South Carolina.

Under such an arrangement, the periodical developed a two-edged editorial policy; Crawford and Ivey each filled two pages with editorials, often in direct conflict. It was the time of the Kilgo-Clark controversy over higher education and the Gattis-Kilgo lawsuit that grew out of it. Ivey used his pages to support Kilgo, and Crawford attacked Trinity College for accepting tobacco money, praising other Methodist colleges in the state to the exclusion of Trinity. After two years the North Carolina Conference withdrew its support of the Advocate and Ivey reestablished the Raleigh Christian Advocate. The controversy did not end there, however. Kilgo took exception to some of Crawford's statements, and the disagreement that followed led Crawford's son, R. B., a prominent Winston merchant, to a physical attack on Kilgo on 22 July 1901. Reaction strongly favored Kilgo; two months after the incident, L. W. Crawford made arrangements for the Western North Carolina Conference to buy his stock in the Advocate and withdrew from the paper to devote his time to the chapel he had established. In spite of the controversy that had attended his editorship and the withdrawal of the support of the North Carolina Conference, he had put the Advocate on a sound financial footing.

After finishing four years at the church on Spring Garden Street in Greensboro, Crawford went back to Reidsville as pastor; in 1907 he went to the Asheville District as presiding elder. Early the next year, while meeting appointments in Yancey County, he contracted pneumonia and died. His body was brought back to Greensboro and buried there.

On 12 Dec. 1872, Crawford was married to Mariemma Pullen of Raleigh, who had been educated at Louisburg College, under Dr. T. M. Jones, and at Vassar. At the time of her marriage she was teaching under Dr. Jones at Warrenton. The Crawfords had a family of five sons and one daughter. For two years, Mrs. Crawford assisted her husband in editing the Advocate ; after he gave it up, she continued to edit the page of the Woman's Foreign Missionary Society for years. She died in 1925 at the age of seventy-five.

The John Crowell linked to in

The John Crowell linked to in the article about Leonidas Wakefield Crawford is not John Franklin Crowell, who was president of Trinity College when it moved from Trinity, NC, to Durham.

Thank you for visiting NCpedia and especially for taking the time to let us know about the incorrect link. I have updated it to link to the NCpedia article on John Franklin Crowell.

Thank you and best wishes,

Thanks for visiting NCpedia. I will forward your comment to our NCpedia team. Please let us know if you have any other comments or questions.

Thanks for this excellent

Thanks for this excellent reference! This was my Great Grandfather.