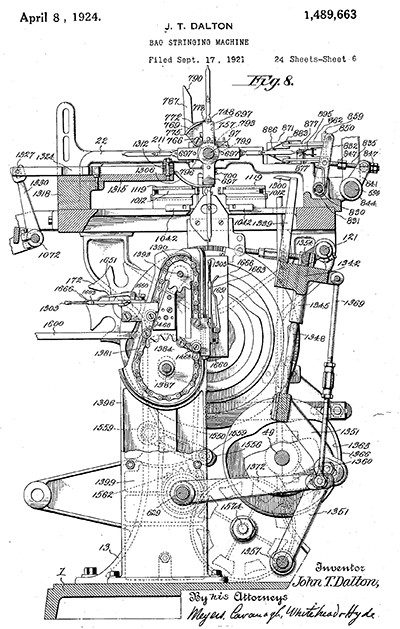 John Thomas Dalton, inventor, was born on a farm near Franklin Junction (now Gretna) in Pittsylvania County, Va. At a very early age he demonstrated an interest in mechanical devices, such as a sewing machine and a wheat threshing machine, which he learned about from a nearby blacksmith and from his father who was a farmer, carpenter, and operator of a planing mill and a water-powered gristmill. When he was eleven, he began attending school during the winter months but discontinued the practice several years later after completing a study of the books available in the schoolhouse where all grades were taught together. His father died while he was young and his mother soon remarried.

As a youth Dalton worked long hours in the fields, although he preferred working in the shop. Before he was eighteen he had built a wagon with black gum wheels, a hand-powered wood lathe, a corn sheller, a cider mill, and a small cradle scythe to use in helping his stepfather cut wheat. Impressed by his mechanical ability, his stepfather attempted to gain employment for both of them with the Bonsack Company of Roanoke, Va. Ironically this company, which produced machines to manufacture cigarettes, did not hire them.

While working in a general store Dalton became acquainted with a man who repaired clocks, sewing machines, and watches. They formed a partnership and began traveling to increase their clientele. Later Dalton gained valuable experience as a logger, an operator of a water-powered sawmill, a blacksmith for a copper mining firm, and a partner in a blacksmith and wheelright shop. For working on a road repair gang he was paid fifty cents for a ten-hour day. On several occasions when he needed transportation he jumped trains or hoboed, wearing two suits during the winter. He eagerly tried to learn the mining business, daringly led a crew in replacing the timbers in a caved-in mine, and was made a captain or mine foreman at the unusually young age of twenty-one. Not receiving an expected raise in pay, he quit mining to work in a blacksmith shop. In 1905 a man visiting the shop informed him that Golden Belt Manufacturing Company of Durham, N.C., would offer $100,000 to anyone who could invent a machine to insert the drawstrings in smoking tobacco bags. At that time women living near the American Tobacco Company in Durham strung the bags by hand at thirty cents per thousand. Dalton was interested in the $100,000 but lacked the necessary capital for the venture. A friend, Herman Crowell, also became interested in the project and provided $9,000 to become his partner. In Virgilina, a town that derived its name from its location on the North Carolina-Virginia border, Dalton made use of his shop to develop a crude machine to put strings in the bags. This was patented at a cost of $600.

He decided to send the machine to the Murrill and Keizer machine shop in Baltimore for refinements to obtain a greater degree of accuracy. Later he redesigned the machine, adding a device to automatically feed the bags on the stringer and an index drum or wheel to pack the bags into bundles of twenty-five after stringing. He also invented a new knotter head to eliminate the large amount of wasted thread. A second patent was secured in 1907 at a cost of $1,200.

Again in need of financial assistance, Dalton took in Dr. E. J. Tucker and R. H. Wright, Sr., as partners. They formed the Bag Stringing Machine Company with Wright as president and Dalton as vice-president. The machine was moved to a building in Durham owned by Wright and offered to Golden Belt Manufacturing Company, but it was not accepted because of imperfections in production. The machine was then shipped to the Taft-Pierce Manufacturing Company in Rhode Island for modification. After changes were made the machine was again demonstrated to representatives of Golden Belt. Again they rejected it due to the low speed of production, and the machine was sent to the Detrick and Harvey Machine Company in Baltimore for further refinement. Dalton's dream came true in 1912 when Herman Crowell finally obtained a contract from Golden Belt, which hired Dalton to supervise the machine's installation and stringing operations. He also visited the American Machine and Foundry Company in Brooklyn to oversee the construction of more machines. Six years had passed since Dalton had begun working on the stringing machine; during that time he had endured long hours of work, travel, and financial problems to make the project succeed.

After finishing his work at Golden Belt, Dalton was engaged by Wright to develop a machine to weigh tea, cut tea bags, put tea in the bags, sew the seams of the bags, and attach tags. The successful completion of this job resulted in the incorporation of the Wright-Dalton Machinery Company. Later the development of a packing machine led to the establishment of Wright-Dalton Automatic Tobacco Packing Machine Company. In 1937, after Dalton and Wright disagreed over the terms of partnership, the former gave up his share in the two companies.

Dalton rejoined Golden Belt where he was assigned the task of developing machinery to staple the tags on smoking tobacco bags. The prestapled tags tangled easily and thus interfered with packing at the Durham branch of the American Tobacco Company. While Preston Fowler, Sr., was branch manager in Durham, Dalton began working with W. H. Ogsbury, who was destined to be the next branch manager. One of Dalton's first recommendations was to provide separate tagging machines for each packer rather than having the tags attached to the bags before packing. He later invented an amazing bow tier to tie the string on the Bull Durham Smoking Tobacco bags. This machine became known locally as the "tie-boy" because it replaced the young boys who sat on top of the machines to tie the bows. The automatic "tie-boy" is still used at the Richmond branch of the American Tobacco Company.

At American Dalton developed numerous innovations. One of his major accomplishments was a turntable for getting cork-tipped cigarettes turned the same way on each side of the catcher belt after the cigarettes were made. This device made it possible to have one employee per machine catch cigarettes rather than the two workers previously required. He also built a machine to fabricate one of the cigarette-making machine parts, the tube bottom, which influenced the shaping of the cigarette. Dalton devised a mechanical calculating device for quickly solving trigonometric problems. He invented a press to compress tobacco in hogsheads before shipping to redrying plants and an automatic feeder for tobacco cutting machines, and he contributed to the development of an automatic system for feeding cut tobacco to the cigarette-making machines, a system that was of major significance to the entire tobacco industry. Another one of his products was a machine for removing the pins in pin rollers.

During World War II the federal ordnance agency became interested in reducing the labor cost of loading bandoliers with cartridges. When asked by the agency to develop an automatic loading machine, the president of the Package Machinery Company recommended that Dalton be selected for the job. As a contribution to the war effort, the American Tobacco Company donated the time of Dalton and the use of its facilities with no expectation of profit; however, the government reimbursed the company for the cost of developing the machine. A government inspector sent to examine the work was terrified when he learned that Dalton was using live ammunition in his experiments, but the results were successful.

After over nineteen years of employment with the American Tobacco Company, Dalton retired at the age of seventy-seven. Shortly before his death nine years later, Dalton offered a plan to the U.S. government to assist in gaining the initial thrust in launching a rocket in space.

Dalton was a colorful individual with mechanical ingenuity; perseverance, as evidenced by the duration of his work in developing the stringing machine; and integrity, as demonstrated by his payment of small loans made years before he sold the stringing machine. He also had great willingness to work as exemplified when he worked ten hours a day in a machine shop, then learned drafting and drew plans for a new machine after hours.

Dalton married Mary Wilborn from Halifax County, Va., on 27 Oct. 1901 at North Fork Baptist Church near Virgilina, Va.; their children were Florence, Anna Maude (Buxton), Thomas Baltimore, Virginia (Huss), John Wilborn, and twins, Maye Elizabeth (Singletary) and Macon Mitchell. He was buried in Maplewood Cemetery, Durham. A portrait of Dalton by one of his children is owned by Dr. and Mrs. W. V. Singletary of Durham.

Fascinating man. I own the

Fascinating man. I own the farm on Dalton Mill Rd where John produced ideas. It's a beautiful place. Most all of the buildings are still in tact including the garage which was his workshop.