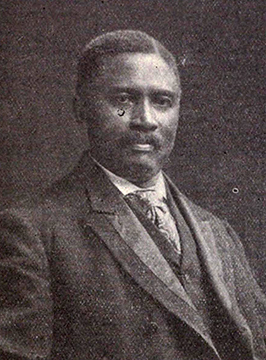 John Campbell Dancy Jr., editor and public official, was born in Tarboro, the son of John C. Dancy, Sr., a slave who became a freeman and, after the Civil War, was a builder and contractor and an Edgecombe County commissioner. After receiving home instruction, the younger Dancy attended the county school and worked briefly in the printing office of the Tarboro Southerner, where he learned to set type. In 1873 he entered Howard University in Washington, D.C. The death of his father interrupted his education; he returned to Tarboro where he taught and was principal of a school for blacks, which was attended by three hundred pupils. During a brief interlude he accepted appointment by Congressman John Adams Hyman, a black Republican from North Carolina, to a position in the Treasury Department in Washington, D.C. Resigning, he returned home again and renewed his interest in education as well as in the cause of temperance. Already active in the North Carolina Independent Order of Good Templars, he attended the international meeting of the order at Liverpool, England, in 1879, where he was elected right worthy grand marshal. He was president of the temperance convention of blacks that met in Goldsboro in 1882.

Dancy's interest in politics was growing, and in 1887 he was secretary of the State Convention of Colored Men held in Raleigh. He was also chief secretary of the state Republican conventions in 1880, 1884, 1886, 1888, and 1890. In 1892 he campaigned for congressional candidate Thomas Settle. He was elected register of deeds of Edgecombe County in 1880 and reelected in 1882 but defeated in 1884. As a delegate to national Republican conventions, he seconded the nominations of General John A. Logan for vice-president in 1884 and John Sherman for president in 1888. During campaigns he frequently worked in Virginia, West Virginia, Tennessee, Illinois, Ohio, and Indiana. In 1891 President Benjamin Harrison appointed Dancy collector of customs at the port of Wilmington—the highest paying federal appointive position in the state—and he served until the Democrats returned to power in 1893 following the election of Grover Cleveland.

While in Tarboro Dancy had been editor of the North Carolina Sentinel, apparently for the period 1882–85. Long active in the African Methodist Episcopal Zion Church, he was named editor of the Star of Zion in 1885 and moved to Salisbury for this position. He continued as editor until 1892. One of his objectives, never realized, was the union of his church and the African Methodist Episcopal Church. He was general manager of his church's centennial in New York and spoke at Carnegie Hall together with Booker T. Washington and other noted black leaders. He was a popular and effective speaker and delivered commencement addresses at various schools and colleges including Tuskegee and Livingstone.

From 1901 until 1910 Dancy served as recorder of deeds in Washington, D.C., a Republican political appointment. At various times during his life, he was also occupied with a variety of causes. In 1895 he was a commissioner for Negroes in North Carolina for the Cotton States and International Exposition in Atlanta. He was a board member of the Coleman Manufacturing Company, a black-owned textile mill in Durham, and a trustee of Livingstone College in Salisbury.

Dancy's first wife was Laura G. Coleman of Morganton by whom he had five children, two boys and three girls (two of whom died in infancy). She died in December 1890, and in March 1893 he married Florence Virginia Stevenson of Allegheny City, Pa. Their son, John C. Dancy III, was active in the Urban League and author of Sand Against the Wind, his memoirs, published by Wayne State University Press in 1966.