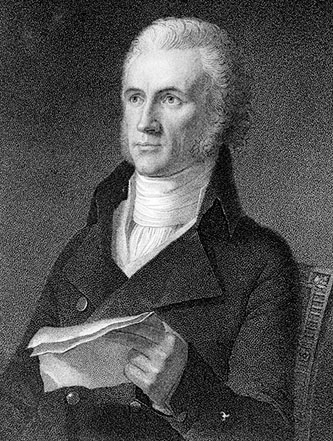 William Richardson Davie, statesman, Revolutionary War officer, and founder of The University of North Carolina, was born in the parish of Egremont, County Cumberland, England. His parents, both Scottish, had established their residence below the Solway Firth some time before the arrival of their first born, William Richardson. According to family legend, his father, Archibald Davie, had established a "manufactory of damask" in Egremont and his mother, Mary Richardson, came from a substantial, cultivated family in Dumfriesshire, Scotland. Some evidence as to the position of the family in the British Isles may be inferred from the heraldic arms that his father had engraved on his wife's tomb in Old Waxhaw Presbyterian Churchyard near Lancaster, S.C.

In 1764, at the age of eight, Davie moved with his parents, a brother, and a sister to the Waxhaws near Lancaster, S.C. There they joined his maternal uncle, William Richardson, minister of the Old Waxhaw Presbyterian Meeting House, the religious mecca for the inhabitants of the entire Waxhaws. Richardson's wife was the daughter of the noted divine, the Reverend Alexander Craighead, the first Presbyterian minister with a regular pastorate in western North Carolina and the third in the colony—the Rocky River Church in Mecklenburg County. In view of these associations, it may be assumed that Davie held to the Presbyterian faith throughout his life, but there is no available evidence of this other than his burial in the Waxhaw Presbyterian Churchyard.

Young Davie finished at the College of New Jersey (later Princeton University) in October 1776 just as the American Revolution broke out, and at once he plunged into the partisan warfare of the Carolina Piedmont. So successful was he as a partisan leader that contemporaries ranked him with Francis Marion ("the Swamp Fox"), Thomas Sumter ("the Gamecock"), and Andrew Pickens. Wounded at the Battle of Stono Ferry near Charleston in June 1779, he retired to Salisbury, N.C., where he read law under Judge Spruce Macay, as did Andrew Jackson several years later. After the fall of Charleston and the arrival of Cornwallis in the Carolina Piedmont, Davie organized a company of cavalry and set out to harass the British forces. When Nathanael Greene assumed command of the Southern Army at Charlotte in December 1780, he persuaded Davie, who was at first reluctant, to give up his field leadership and serve as Greene's commissary general, charged with the onerous and almost impossible task of subsisting Greene's army during the closing year of the war. 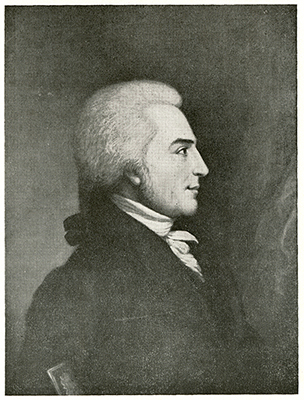 After the war, Davie practiced law in Halifax, N.C., where he married Sarah Jones, daughter of the conservative aristocrat Allen Jones and niece of the radical, democratic aristocrat Willie Jones. Here he became part of the social and political life of eastern North Carolina with its love of sports and its interest in politics. His interest in sports—especially horse racing—led to his acquiring the famous race horse, Sir Archy, and his interest in government and politics led to his steady rise in the Federalist party.

At thirty Davie was a framer of the Constitution of the United States. He served on the Grand Committee and cast North Carolina's vote for the Great Compromise over representation in the two houses of Congress, making possible the success of the convention and the Constitution. Attendance at court in North Carolina precluded his staying to sign it. He spent the next two years, along with James Iredell, in fighting its anti-Federalist opponents led by Willie Jones. At the Fayetteville Convention in 1789, he introduced and successfully guided the bill for North Carolina's ratification of the Constitution. He also introduced the bill to charter The University of North Carolina. Chiefly responsible for its establishment, building, and endowment, the selection of its faculty, and the planning of its curriculum, he is recognized today as "the Father of the University." In recognition of his services, he was awarded the first LL.D. degree in 1811. There followed years of constructive leadership in the General Assembly culminating in Davie's election on the Federalist ticket as governor of North Carolina in 1798. The next year President John Adams appointed him, William Vans Murray, U.S. minister at The Hague, and Chief Justice Oliver Ellsworth as ministers plenipotentiary to France to bring an end to the undeclared naval war with France following the XYZ affair. After months of tedious negotiations—some directly with Napoleon Bonaparte—they negotiated the French Convention of 1800, thus ending the war. 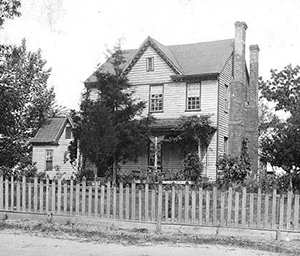 When he returned to North Carolina, Davie found that the political scene had changed in both state and national politics with the election of Thomas Jefferson and the Democratic-Republicans. A Federalist in a thoroughly Democratic state, his political fortunes began to decline, and he lost out in the campaign of 1803 for U.S. congressman against Willis Alston of Halifax County. Disillusioned, he retired to his South Carolina plantation, Tivoli, near Lancaster where he occupied himself with farming, horses, books, a voluminous correspondence, advice to the trustees of the university at Chapel Hill, and writing the sketches of his participation in and observations on the American Revolution. He died at his plantation, a Federalist to the end. He was buried in the Davie family burial enclosure at Old Waxhaw Presbyterian Church.

Davie was survived by three sons and three daughters: Allen Jones, who had moved to Mississippi with his wife and two sons; Hyder Ali, who lived with his wife and daughter three miles from Tivoli; Frederick William, then at school; Sarah, who married William DeSaussure, the son of Chancellor DeSaussure, and lived in Columbia; and Mary Haynes and Rebecca, who lived at Tivoli.

An active Mason, Davie was Grand Master of Masons in North Carolina from 1792 until 1798.

Several excellent portraits of Davie have been preserved, including an oil portrait copied by Charles Xavier Harris from the original executed in Paris in 1800 by John Vanderlyn. The original has been lost or destroyed but the copy, formerly owned by Preston Davie, a collateral descendant, is now at The University of North Carolina, Chapel Hill. A bust-length miniature showing him in the uniform of a brigadier general, U.S. Army, executed in Paris in 1800 by Eliza Mirabel, is in Independence Hall, Philadelphia. A pastel portrait, painted by James Sharples in America in 1799 before Davie embarked on his mission to France, is also in Independence Hall. Finally, an original physionotrace, made in Paris in 1800 by Gilles Louis Chrétian, who invented the process of making profile silhouette portraits, is owned by The University of North Carolina, Chapel Hill.

Did Davie support slavery at

Thank you for visiting NCpedia and for taking time to share your question.

I believe that you should contact the State Archives of North Carolina.  I think that the Samarcand Records would be part of the records of the NC Department of Public Safety.  Archivists at the State Archives could confirm which agency holds the records.  Here is a link to their website: https://archives.ncdcr.gov/

I hope this helps.  Please let me know if I can help with anything else.

HOW DID WILLIAM RICHARDSON

Thank you for visiting NCpedia and taking time to share this question.  It's a great question!

I have consulted a number of sources and have, unfortunately, not been able to find an answer. Davie died at the age of 64 which was, for a person of his time, old age.  If you are interested in pursuing this question, you may want to consider looking at historic newspapers from South Carolina, where he died.  It is possible that a newspaper might have included an obituary.

Thanks again for visiting NCpedia!

I am trying to find the names

Ms. Ross, It seems we're on

Ms. Ross, It seems we're on the same errand. I am a descendant of Edward "Ned" Richardson (c. 1751-1798) through his daughter Elizabeth (c. 1796-1880, Mrs. Valentine A. Starnes). I found an old newspaper article which states that William Richardson Davie and our Edward "Ned" Richardson were first cousins, Gov. Davie's mother being a sister to Ned Richardson's father. I'd love to compare notes with you. My email is Stearnsfield (at) aol.com. Best Regards, John Field Pankow

Hello -- Thank you for your

Hello -- Thank you for your inquiry and interest in the Davie family history.

The librarians at the State Library Government & Heritage Library where NCpedia is based may be best able to help you with this research.  I have forwarded their contact information to you in a separate email.

You can also find their contact information online at http://statelibrary.ncdcr.gov/contact.html

Thank you for your visit to NCpedia and good luck with your research!

hi I am a elementary school

hi I am a elementary school student and I am doing a project and I was wondering if u can give me some information about his children's names thanks!!!

You can find all of his

You can find all of his children's names in the article in the third paragraph from the bottom.