William Henry Davis, editor and publisher of a partisan newspaper, The Hornet, was born at Fork, Davie County, the son of Daniel V. Davis and Sarah Hodges. He was married to Maude Williams. After graduating from Hodges Business College, a private academy near Fork, he taught school and toured as a lecturer on contemporary topics.

In 1902, at his home in Fork, Davis began publishing The Hornet, according to its editor the "Hottest Democratic Paper in the United States." Considering "fire-eating politics at the national level," he competed with the Republican Yellow Jacket, published at Moravian Falls, N.C. To launch the paper, Davis sent out sample copies and ran an advertisement in The Commoner, published by William Jennings Bryan. The Hornet quickly attracted national attention, received help from the national headquarters of the Democratic party, and by 1914 attained a circulation of some 25,000, much of which was in California, New York, West Virginia, and Kentucky. The large circulation required Davis to build an office near his home and to stop printing the paper on his own cylinder press. In 1913, following the election of Woodrow Wilson, the post office at Fork was reestablished to facilitate the mailing of the paper; Davis was postmaster.

Initially, The Hornet appeared only before the November elections. From 1912 until World War II, however, it was published monthly except from 1930 to 1932. After Pearl Harbor and the United States entry into the war, the paper was suspended in an effort to discourage partisanship. When The Hornet was discontinued as a Democratic party newspaper, Davis continued to publish it as an organ for the Free-Thinkers of America until about 1955. Its circulation was about 10,000.

Davis was buried in the Fork Baptist Church cemetery. 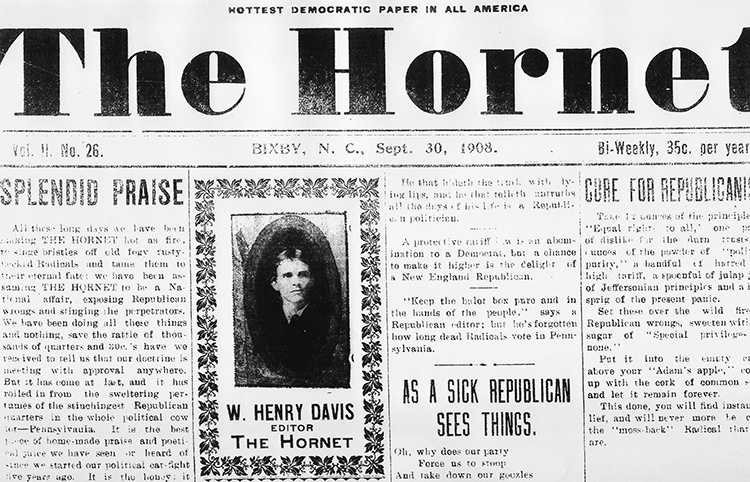