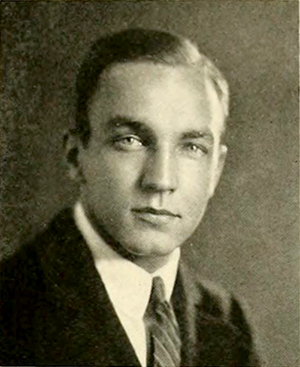 George Vernon Denny, Jr., educator and radio commentator, was born in Washington, N.C., the son of George Vernon and Carrie Ricks Cobb Denny. After attending the public schools of Washington and Bingham Military Academy, Asheville, he entered The University of North Carolina in 1918; he was graduated in 1922 with a B.S. degree in commerce. While a student at the university, Denny was active in the Carolina Playmakers, which was organized his freshman year by Professor Frederick H. Koch. He was given a role in one of its first productions, When Witches Ride by Elizabeth Lay, and in his junior year was made its business manager at a salary of fifty dollars a month. He was also a member of the Pi Kappa Phi fraternity and the Dialectic Society. Following graduation he was employed as director of the Bureau of Lectures and Entertainment in the university's Extension Division. In 1924 Professor Koch appointed him business manager of the Carolina Playmakers and instructor in play production. In that capacity he handled the Playmakers' publicity and booked its tours throughout the state.

In 1926 Denny left North Carolina and went to New York where he hoped to make a career of acting. After two years of going, as he said, from "flop to flop" in the theater world and a brief stint as manager of a small lecture bureau, he gladly accepted an offer from Columbia University to direct the extension work of its Institute of Arts and Sciences. For the most part his job consisted of engaging lecturers on a large variety of subjects for the Institute's adult education program. Hearing of his successful work at Columbia, the League for Political Education, headquartered at Town Hall on Forty-third Street, employed him as its associate director in 1930. Since 1894 the league had presented lecturers of all political creeds to speak on various aspects of public affairs. In 1937 Denny was made director and changed the name of the organization to Town Hall, Incorporated. In addition to scheduling lectures, short courses, and discussion groups and concerts, he edited The Town Crier, the league's official publication.

In considering how he could broaden the scope of Town Hall's concept of providing open discussions of vital and controversial issues of the day, Denny conceived the idea of using the medium of radio to bring this kind of program into American homes. After he had conferred with John Royal, vice-president in charge of programs for the National Broadcasting Company, Royal committed NBC to pay all expenses for six experimental and uncensored programs, beginning on 30 May 1935. Thus was born America's Town Meeting of the Air. The subject of the first program was "Which Way America—Fascism, Communism, Socialism, or Democracy?" discussed by Lawrence Dennis, A. J. Muste, Norman Thomas, and Raymond Moley. Following the initial broadcast, Town Hall received over 3,000 letters commenting favorably on the program. At the conclusion of the six broadcasts NBC agreed to carry the program as a regular weekly feature on Thursday night. As moderator of the Town Hall program, Denny opened each meeting by ringing the town crier's bell and giving the folksy greeting, "Good evening, neighbors." He conducted the programs as nearly as possible on the model of an old-fashioned New England town meeting, adding a touch of well-planned showmanship. The timely topics he chose for discussion frequently provoked heated exchanges between the speakers and the audience. The town meeting, in his opinion, "played a part in the founding of this country, and will continue to play a part in preserving the principles upon which the nation rests." Denny frequently asserted that free speech was "the most powerful and at the same time the most dangerous thing in the world," and that it meant "the right to advocate the wrong as well as the right."

Following several years of successful production, Denny decided to take America's Town Meeting of the Air on tour. In the first coast-to-coast tour in 1941, the program originated in five different cities. The tour idea proved to be popular and was expanded to include more cities. In May 1942 the Junior Town Meeting League was formed to encourage the use of the town meeting idea in high schools. Not content to spread the gospel of the town meeting concept in his own country only, Denny planned a world tour in 1949. With the co-operation of leaders in business, labor, agriculture, and the professions, forty representatives of these groups participated in the discussions presented during a two-month tour of fourteen cities in Europe, the Near East, and the Orient.

On the occasion of the fifteenth anniversary of the founding of America's Town Meeting of the Air, Denny declared that "we rededicate ourselves to the high purposes for which this institution was founded and we invite our fellow Americans and freedom-loving peoples everywhere to join us in our search for wise and just solutions to the serious problems before us." He believed that many of the world's problems could be solved through "a program of education" embodying the principles of the Town Hall ideal. After seven years as associate director of the League for Political Education and fifteen years as president of Town Hall, Incorporated, he resigned in 1952. During the presidential campaign of that year, Denny commented on the news five nights a week over a Los Angeles radio station. In 1956 he was made vice-president of Eisenhower's "People to People Program," established to promote friendship and understanding among people throughout the world. The year before his death he took a group of thirty-two American leaders through seven South American countries where he conducted his now famous "Town Meeting" programs.

Denny received the LL.D. degree from Temple University in 1940 and from Ithaca College in 1951. He was an Episcopalian and a Democrat.

I wanted you to be aware of a

I wanted you to be aware of a mistake in this biography of my grandfather. His daughter, Mildred Nelson, was married to Donald Horton. My mother, Mary Virginia, was married to James Davidson. In this article it is reversed. No big deal but I thought I would set the record straight. Thank you, Linda Davidson Hoffman

Thank you so much for letting us know!  I have made the correction.