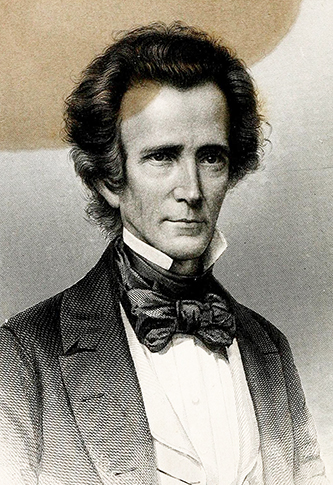 James Cochran Dobbin, legislator, congressman, and secretary of the navy under Franklin Pierce, was born in Fayetteville, the son of John Moore Dobbin and Anness Cochran. His paternal grandfather, Hugh Dobbin, was a successful merchant in the Carolinas; his maternal grandfather, James Cochran, was a prominent planter and politician from Person County. Young Dobbin was educated at the Reverend Colin McIver's academy in Fayetteville and at the Bingham School in Hillsborough. At the age of fourteen he entered The University of North Carolina, from which he was graduated with high honors in 1832. From 1832 to 1835 he read law with Robert Strange in Fayetteville and was admitted to the bar in 1835, thereafter practicing in Fayetteville and vicinity.

Although he participated in local politics, Dobbin shunned political office until he was nominated—without his knowledge—by the Democrats of his district as a candidate for Congress. Elected in 1845, he served one term in the House (1845–47) but declined to run a second time. Soon after returning to public life, he was elected to the North Carolina General Assembly. In the 1848 legislative session he gained distinction by making an impassioned speech supporting the establishment of a state hospital for the insane. Dobbin's efforts, which his contemporaries credited with saving the bill but which were contrary to the tendencies of his party, were made at the request of his dying wife. She had been befriended and nursed during her fatal illness by Dorothea Dix, who had come to North Carolina to crusade for better treatment of the insane. 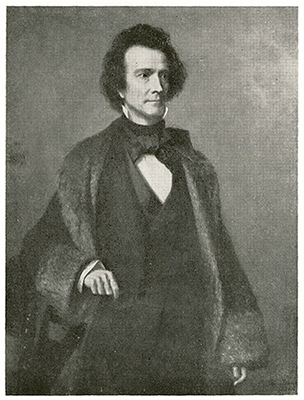 In 1850 Dobbin was reelected to the General Assembly and chosen speaker of the Commons. Two years later he led the North Carolina delegation to the Democratic National Convention in Baltimore. When the convention deadlocked over the competing candidacies of James Buchanan, Lewis Cass, Stephen Douglas, and William L. Marcy, Dobbin nominated the relatively unknown Franklin Pierce. In a brief speech he led a convention stampede that selected Pierce as the party's candidate for president. In the victorious campaign that followed, Dobbin strongly supported Pierce and himself won reelection to the General Assembly. When the legislature met in 1852, he was a leading Democratic candidate to succeed the retiring Whig senator, Willie P. Mangum. However, disaffected members of his own party prevented an election, and for a time North Carolina had only one senator.

Because of Dobbin's service in gaining his nomination and election in 1852, Franklin Pierce appointed him secretary of the navy. Though unfamiliar with naval matters, Dobbin worked tirelessly as secretary and succeeded in bringing about significant reforms in that nearly moribund department. In his annual reports and recommendations he advocated an enlarged and more modern navy through the building of six steam propeller frigates and five steam sloops and through increasing naval personnel by one-third. He also sought to make the navy more vital and efficient by securing a number of reforms, including promotion by merit instead of by seniority and the establishment of an officer retirement system. In addition, he attempted to establish the navy as a permanent body of seamen and promoted the reintroduction of a naval apprentice system. During his four years in office from 1853 to 1857, his unflagging efforts to correct many of the weaknesses of the U.S. Navy helped put it on a sound footing and demonstrated the potential importance of intelligence, courage, and persistence in naval administration.

Dobbin's dedication and hard work while secretary took its toll on his health, which had never been robust. Five months after leaving office, at the age of forty-three, he died at his home and was buried in Cross Creek Cemetery, Fayetteville. In 1838 Dobbin married Louisa Holmes of Sampson County. Before her death in 1848, their marriage produced three children: Mary Louisa Dobbin Anderson, James C., Jr., and John Holmes. Portraits of James C. Dobbin are owned by the Navy Department, Washington, D.C., and by the Philanthropic Society of The University of North Carolina, Chapel Hill.