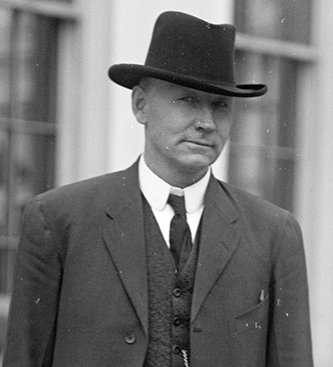 Robert Lee Doughton, farmer, banker, congressman, and Democratic party leader, was born at Laurel Springs in Alleghany County, the son of Jonathan Horton and Rebecca Jones Doughton. The family was prominent in North Carolina politics. His brother, Rufus A. Doughton, served as legislator and lieutenant governor; a nephew, J. Kemp Doughton, was speaker of the house in the 1957 General Assembly. Although educated at Laurel Springs School and Traphill Academy, Robert Doughton credited an itinerant teacher with opening his mind to the marvels of mathematics. Later in life he was awarded honorary degrees by The University of North Carolina and Catawba College.

Doughton began his career in public life as a member of the state Board of Agriculture (1903–10), of the state senate (1909–10), and of the state Prison Board (1909–11). Known for his ruggedness, frugality, and business acumen, he acquired in 1911 the majority stock of the Deposit and Savings Bank, North Wilkesboro, where he and his family often spent the winter months, and served as president until 1936. Through a merger in 1937 it became a part of The Northwestern Bank, now the state's fifth largest banking system with deposits in excess of $1 billion. After the merger he was chairman and director of the bank.

Nominated in 1910 by the Democrats of the Eighth Congressional District, Doughton defeated the Republican incumbent, Representative Charles H. Cowles. His forty-two years of service in the U.S. House of Representatives began 4 Mar. 1911 and ended with his voluntary retirement 3 Jan. 1953, a period covering the Sixty-second through the Eighty-second Congress during the administrations of seven presidents.

Known affectionately as "Farmer Bob" and "Muley Bob," Doughton was a physically large, vigorous man, six feet two inches tall and weighing 215 pounds. He found relaxation in farm work and was a farmer all of his life. As a young man and cattle raiser he drove livestock from the Blue Ridge Mountains to markets in the Piedmont. In Congress he was known to rise before daybreak to be at his office by sunup, attending to his legislative duties quietly and effectively; he was not loquacious. He rose through the ranks of the Ways and Means Committee, becoming chairman in 1933 with the ascendancy of the Democrats led by Franklin D. Roosevelt. He was a leader in preparing the far-reaching tax legislation of that era, including the formulation and passage of the Social Security Act in 1935 and later amendments.

In a letter to President Truman in 1952, Doughton observed: "I take more pride in my successful efforts on Social Security legislation than any other legislation that I have ever been responsible for or actively supported." At the time of his retirement he was credited with the authorship of more tax bills than any man in history; he had been chairman of the Ways and Means Committee longer than any previous chairman and was the first farmer to serve in that post. Described as flinty and frugal, Doughton kept the taxpayer in mind, admonishing his colleagues that "You can shear a sheep every year but you can skin him only once." Because of his financial conservatism and business judgment in the House, he was occasionally unopposed for reelection with the support of leading Republicans. Wilkes County, one of the strongholds of the Republican party, was not assigned to his district when redistricting placed Doughton in the Ninth Congressional District. He retired having never been defeated for public office. 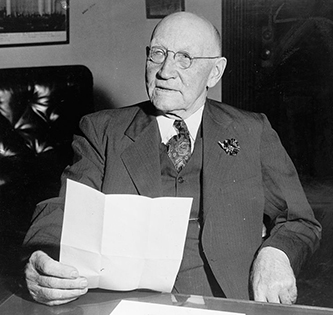 In the late 1930s Doughton was urged to run for governor or senator. On 25 Feb. 1938 President Roosevelt, realizing the importance of the veteran congressman in the House of Representatives, urged him to remain there. In his reply of 28 February, Doughton thanked the president for his confidence and told him that he would seek reelection. Following his retirement he served two years as Democratic national committeeman and resigned from that office on 5 Aug. 1953.

Instrumental in creating the Blue Ridge Parkway, he lived to see the former Bluff Park named Doughton Park. He was also successful in his efforts to establish the Veterans Hospital in Salisbury after World War II. At age ninety, he was found dead in bed in his Laurel Springs farmhouse; death was attributed to a heart attack while he slept. Although in failing health, he had been involved in the political campaign and was preparing to appear at a rally in support of his successor, Representative Hugh Q. Alexander. Funeral services were held in the Sparta Baptist Church, with burial in the cemetery of the Laurel Springs Baptist Church where he was a longtime member and deacon. His portrait hangs in the Ways and Means Committee office, U.S. House of Representatives, Washington, D.C.

I am proud to say I am the

I am proud to say I am the great niece of Robert Doughton. He was my grandmother’s older brother. I am married to a man who is also nicknamed “Farmer Bob.” My grandmother was Myrtle Doughton Fender. I had the honor of staying in the family homestead in Laurel Springs. I also got to meet my cousins, two of whom were the daughters of former governor Rufus Doughton.