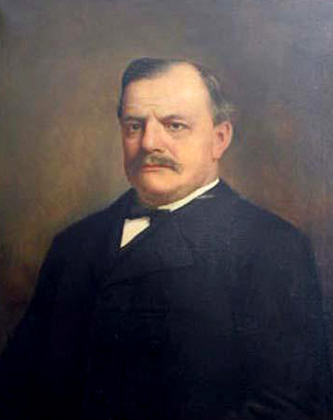 Robert Martin Douglas, associate justice of the North Carolina Supreme Court, was born near Douglas, Rockingham County, the son of Stephen A. Douglas of Illinois, prominent U.S. senator and Democratic presidential candidate in 1860, and Martha D. Martin. His maternal grandfather, Robert Martin, had large plantations on the Dan River and on the Pearl River in Mississippi. When Robert Douglas was four years old his mother died, leaving him and his brother Stephen A. Douglas, Jr., in the care of their grandmother, Mary Martin. After their father's marriage to Adèle Cutts, the boys lived primarily in Washington, D.C. Following the death of his father in 1861, Robert was reared by his stepmother. He became a Roman Catholic and was educated in private schools, Loyola College, and Georgetown University. From Georgetown he was awarded an A.B. in 1867, a master's degree in 1870, and an honorary doctor of laws degree in 1897.

Although his father had been a national leader in the antebellum Democratic party, Robert Douglas followed his deathbed admonition to "support the Constitution" and cast his lot with the Republican party. Upon graduation from Georgetown he went to North Carolina to oversee his property; in July 1868 Governor William W. Holden appointed him private secretary to the governor and an aide with the rank of colonel. On a visit to Washington in March 1869 Douglas called on his former neighbor and greatly admired family friend, Ulysses S. Grant, who had just become president. Intending only to offer his congratulations, young Douglas found himself with an appointment as assistant secretary to the president. After seven months, he became the president's private secretary and remained in that position for the balance of the first term. As a native southerner and trusted friend of the president, Douglas was able to reinforce Grant's moderate attitude toward the South.

In 1873 Douglas was appointed U.S. marshal in North Carolina's new Western District of the United States Circuit Court and settled in Greensboro. On 24 June 1874 he married Jessie Madeleine Dick, the daughter of Robert Paine Dick, who had been an associate justice of the state supreme court and was then a federal district judge. Law enforcement work and the influence of his father-in-law led to the study of law under Judge Dick and Judge John H. Dillard. Douglas passed the North Carolina bar in 1885, and by the next year he was serving as the standing master in chancery of the Western District of the United States Circuit Court.

Douglas was nominated for the North Carolina Supreme Court on the Republican ticket in 1896. The Republican-Populist fusion victory in that election enabled him to take his seat as an associate justice on 1 Feb. 1897. He served on the court eight years until he was defeated for reelection in 1904. His reputation as an able jurist was widespread. A contemporary, William P. Bynum, wrote that as a judge "he was noted for his learning, his fairness, his patience and his utter impartiality. His written opinions display not only a thorough comprehension of fundamental legal principles, but an ornateness of style and lucidity of expression which have never been excelled by any member of that court." The bitterness of partisan state politics, however, enmeshed him in an impeachment proceeding in 1901. The Democrats, newly returned to power in a racist campaign, feared that the Republicans on the court might try to overturn the recently passed constitutional amendment on suffrage that required a literacy test and poll tax but exempted most illiterate whites by a "grandfather clause." Consequently, they were determined to purge the court of its Republicans, David M. Furches and Robert Douglas. Articles of impeachment were drawn on a technical violation of the constitution concerning tenure of office. The 1899 Democratic legislature had attempted to oust Republicans and Populists by creating new state offices with the same duties as existing offices. The state supreme court had ruled on a number of the disputed office-holding cases, and in the case of Theophilus White the court had issued mandamuses on the state auditor and state treasurer ordering the payment of White's salary. The Democrats charged that the mandamuses violated a section of the constitution stating that in a claims suit the court could only make recommendations. Despite the fact that the impeachment proceeding was politically motivated, Locke Craig presented an impeachment resolution in the North Carolina House of Representatives in January 1901. A strong Democratic minority led by Henry G. Connor sided with the Republicans and fought the resolution, but it passed. The senate procedure began in February and the trial lasted from 14 to 28 March. The justices were acquitted on all five articles.

After leaving the supreme court in 1905, Douglas returned to Greensboro where he practiced law, wrote articles, and became involved in business and civic affairs in the community. He was an organizer of the first chamber of commerce in Greensboro, a director of the first streetcar company in the city, and a director of the Greensboro Loan and Trust Company. As a writer he contributed to the Youth's Companion magazine, and several of his historical addresses were published—the best known being The Life and Times of Governor Alexander Martin (1898). From 1906 to 1910 he served a term on the North Carolina Corporation Commission. He also was active in the Guilford Battleground Company and was a trustee of the Catholic orphanage in North Carolina.

Douglas had three sons, Robert Dick, Stephen Arnold, and Martin F., and one daughter, Madeleine. His son Robert, an attorney, was appointed attorney general of the state in 1900–1901. A portrait of Justice Douglas hangs in the North Carolina Justice Building, Raleigh.

Trial of David M. Furches and Robert M. Douglas on Impeachment by the House of Representatives for High Crimes and Misdemeanors (1901).