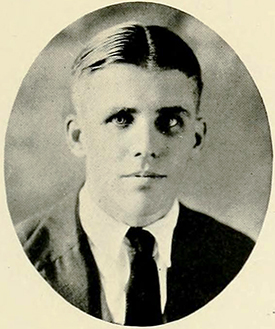 James Edward Dowd, newspaper editor and executive, was born in Charlotte, the son of William Carey and Eloise Butt Dowd. His father owned The Charlotte News. His ancestral line includes Connor Dowd, who settled at Deep River in Cumberland County about 1760. Young Dowd attended Charlotte public schools and Horner Military Academy and was graduated from The University of North Carolina in 1920. While at the university, he became a member of Delta Kappa Epsilon fraternity and joined the Student Army Training Corps in 1918. After working for a year as a salesman for the advertising department of The Charlotte News, he accepted a sales position with W. E. Thomas Real Estate. From 1924 to 1927 he was employed by the Bank of Virginia in Richmond. When his father died in 1927, he returned to Charlotte to work in the business office of The Charlotte News, which was published by his brother Carey. Two years later he joined editor Julian Miller in writing editorials. When Miller resigned in 1932, Dowd became editor.

Dowd hired W. J. Cash to be his associate editor. In his book, The Mind of the South, Cash called Dowd's editorship "one of the most lively, intelligent, and enterprising in Dixie." Cash had spent some time in Europe and Dowd let him handle most of the world news while the editor concentrated on local, state, and national news. Dowd developed a reputation for direct, candid expression and realistic analysis. His editorials, which centered around North Carolina and Charlotte, were marked by a strong desire for community improvement. He was a crusader in such areas as political corruption, slums, state mental hospitals, and bootlegging (he advocated ABC stores). In 1942 he resigned the editorship and accepted a Navy commission. He held the rank of lieutenant in the U.S. Naval Reserve and was on active duty from 1942 until 1945.

After the war Dowd became general manager of The Charlotte News. He was named vice-president and general manager when a group headed by Thomas L. Robinson bought the newspaper from the Dowd family in 1947. Dowd resigned in 1955 to join Knight Publishing Co. as general manager of his old rival, The Charlotte Observer. He was placed in charge of the entire operation except for the news department, a position he held until his death. At the time of his death, he was also vice-president, treasurer, and a member of the board of directors of Knight Publishing Co. of Charlotte, a director of Knight Newspapers Inc., treasurer of the Observer Transportation Co., and vice-president of Observer Charities Inc.

Dowd was active in many civic and professional organizations. He was founder of The Charlotte News' Man of the Year Award and one of the founders of the City Club (Charlotte). For several years he directed programs aimed at beautifying Charlotte. He was a director of the Charlotte Merchants Association, a director of Goodwill Industries, and a member of a commission that revised Charlotte's city charter. In addition, he was a director of both the North Carolina Press Association and the Southern Newspaper Publishers Association.