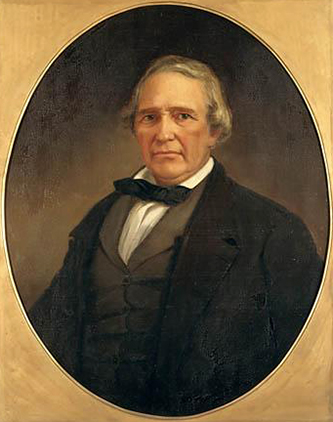 Edward Bishop Dudley, governor, congressman, and capitalist, was born in Onslow County, near Jacksonville, the son of Christopher (1763–1828) and Margaret Snead Dudley (1764–1827). His father was a prominent planter, merchant, and shipbuilder who in 1827 was listed as the owner of ten thousand acres and eighty-seven slaves. His paternal grandparents were Bishop Dudley (1744–88), who was active in the American Revolution, and Rebecca Ward. His maternal grandfather was Robert Snead of Onslow.

Dudley represented Onslow in the House of Commons in 1811 and 1812, and in the senate in 1814. During this period he also served as an officer in the Onslow regiment that helped guard Wilmington during the War of 1812. After the war he moved to Wilmington, which he represented in the House of Commons in 1816 and 1817, and later in 1834 and 1835. In 1816 he opposed the presidential candidacy of James Monroe, and eight years later he was active in a coalition opposed to William H. Crawford and the Old Republican Virginia Dynasty. He challenged Congressman Gabriel Holmes for the Wilmington District seat in Congress, but was defeated in a close contest in August 1829. However, Holmes died a few weeks later, and in a special election Dudley easily defeated William B. Meares. One of his first votes in Congress supported a measure to reduce the pay of its members. During his single term he served on the Private Land Claims Committee. In Washington he quickly developed an aversion to Andrew Jackson and Martin Van Buren, and he refused to run for a second term on grounds that Congress was not a fit place for an honest person. In 1831 he represented his state at the National Anti-Tariff Convention; the following year he was identified with the Barbour movement to stop Van Buren's political rise.

After Dudley returned from Washington, he became a leader in the formation of the Whig party in North Carolina. He incessantly advocated constitutional reform, stronger banks, government support for railroads, public works, and education. He played a dominant role in the creation of the company that built a railroad from Wilmington to Weldon on the Roanoke River, the beginning of the Atlantic Coast Line.

North Carolina's constitutional revisions in 1835 provided for a state chief executive to be popularly elected for a two-year term. The Whigs nominated Dudley as their candidate to oppose the incumbent governor, Richard Dobbs Spaight, Jr. Dudley won by slightly more than 4,000 votes, 33,993 to 29,950. Two years later he was easily reelected over former governor John Branch with a wide margin of 14,000 votes. These years constituted the most progressive period in the antebellum history of North Carolina, and they initiated a decade of Whig control of the state government. In 1840, when Dudley completed his term, his party captured both houses of the General Assembly, elected John Motley Morehead as Dudley's successor, and won the state's electoral vote in the presidential race.

From 1841 to 1847 Dudley served a second term as president of the railroad he had helped to organize. Although there was a movement to send him to the U.S. Senate, he was never again a candidate for public office. In 1844 he was a delegate to the National Whig Convention in Baltimore. After 1847 his health began to fail, and he spent most of his time at his home beside the Cape Fear River.

In November 1815 Dudley married Elizabeth Haywood, daughter of William Henry Haywood, Sr., of Raleigh. Elizabeth was the sister of a U.S. senator and of the wife of Charles Manly, who also served as chief executive of North Carolina. The Dudleys had three boys and three girls: Christopher H., William Henry, Edward, Elizabeth Ann, Jane Frances, and Margaret. After Elizabeth died, Dudley married the widow of General John Cowan; they had no children and she survived him. He died five years before the Civil War and was buried in Oakdale Cemetery, Wilmington.