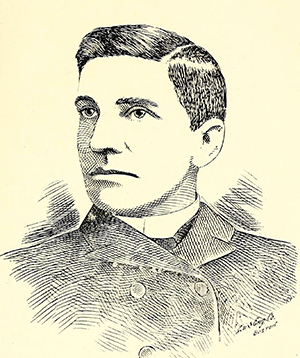 Columbus Durham, Baptist minister and corresponding secretary of the North Carolina Baptist State Convention, was born in Rutherford County, the son of Esther Baxter and Micajah Durham and brother of Plato Durham, a Conservative legislator during Reconstruction. He was baptized in September 1860. At the age of seventeen, he enlisted in Company E, Twelfth Regiment, North Carolina Troops. He was wounded in the hand at Chancellorsville, Va., in 1863 and hospitalized with a gunshot wound in the leg in 1865. He was paroled at Appomattox Courthouse, Va., on 9 Apr. 1865.

After the war Durham entered Wake Forest College in 1867 and was graduated in 1871. In 1890 his alma mater awarded him an honorary doctorate of divinity. Ordained in 1871, he began his first pastorate at Goldsboro Baptist Church. Under his direction the membership more than doubled, and a pastor's study and parsonage were built. His next pastorate was at Durham First Baptist Church where he served from 1876 to 1887. It was from this church that he was called in 1888 to become the corresponding secretary of the North Carolina Baptist State Convention. During his term he played a leading role in the formation of the Baptist Orphanage (now the Baptist Children's Home) in Thomasville. He served on the orphanage's first board of trustees for a brief period prior to his death. He also was a member and president of the Wake Forest Board of Trustees (1878–95), a trustee of the Southern Baptist Theological Seminary, Louisville, Ky. (1884–85), and a vice-president of the Sunday School Board of the Southern Baptist Convention.

Durham's funeral was held at Raleigh First Baptist Church. He was buried in Oakwood Cemetery.