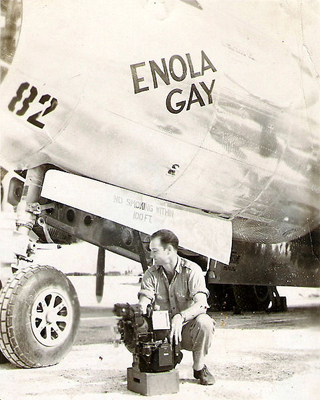 Thomas Wilson Ferebee was born into a large farm family outside Mocksville in Davie County on November 19, 1918. He attended local public schools and excelled in sports in high school and college. At Lees-McRae College in Banner Elk, he lettered in track, basketball, and football, and he looked forward to a major-league baseball career. Unfortunately, a football injury ended these plans. So Ferebee joined the Army Air Corps in the summer of 1941, only months before America’s entry into World War II.

Following flight school, Ferebee received additional training as a bombardier. He soon found himself dropping bombs over North Africa and Nazi-occupied Europe as part of the crew of a B-17 airplane. During this time, he made two lifelong friends in Paul Tibbets, a talented pilot, and Theodore “Dutch” van Kirk, a skilled navigator. Ferebee flew as bombardier in the lead B-17 that made the first American strike against occupied Europe. He also flew as lead bombardier on the first mission during the North Africa invasion. While in Europe, he flew more than sixty combat missions.

In 1944 he was ordered back to the United States and assigned to the newly formed and top secret 509th Composite Group at Wendover Field in Utah, at the special request of Tibbets. (Tibbets once stated that Ferebee was “the best bombardier who ever looked through the eyepiece of a Norden bombsight.”) America’s most closely guarded military secret was development of the atomic bomb. At Wendover Field, Ferebee was one of the men trained in B-29 bombers for future atomic bombing missions. As part of the training, bombardiers were expected to be able to drop a single large bomb with pinpoint accuracy from thirty thousand feet. As soon as the bomb left the plane, the pilots were told to make a sharp turn away from the target area to protect the crew from the atomic explosion. (No atomic bomb had ever been dropped, so no one knew exactly how the explosion would affect the plane above the target area.)

Because of his extensive combat experience and reputation, Ferebee was responsible for all of the bombardiers in training at Wendover Field. After completing training there, the 509th Composite moved to the Pacific theater in late May 1945. It set up base on the island of Tinian in the Mariana chain, only fifteen hundred miles from the Japanese mainland. At Tinian, Tibbets remained the only crewman in the group who knew they had been training to drop an atomic bomb.

At 2:45 a.m. on the morning of August 6, 1945, Tibbets rolled down a runway on Tinian in a B-29, named Enola Gay after his mother. The plane headed toward the Japanese mainland with van Kirk and Ferebee among its crew. At 8:15 a.m., over the city of Hiroshima, Ferebee opened the bomb bay doors and released an atomic bomb nicknamed “Little Boy.” The atomic bomb exploded with a blinding flash forty-three seconds later, destroying much of the city. Casualty figures vary. Despite the devastation and the deaths of thousands of people caused by the bomb, Japanese leaders refused to discuss unconditional surrender. A few days later, the United States dropped a second atomic bomb on Nagasaki, killing thousands more. On August 15, 1945, Japan agreed to the surrender terms, finally ending World War II. President Harry Truman took full responsibility for the use of atomic weapons. It is believed by many that the two bombs had saved thousands of Allied and Japanese lives in the long run, by ending the war without an invasion of Japan.

Ferebee had flown sixty-four combat missions in both the European and Pacific theaters and had played a major role in ending the war. The bombing of Hiroshima became the most historic event of World War II.

Ferebee chose to stay in the military as a career and served in a variety of assignments. After World War II, he flew on B-47s, and he then flew on B-52s during the Vietnam War in the 1960s. When he retired in 1970 he had earned numerous citations and medals, including the Silver Star, the Legion of Merit, two Distinguished Flying Crosses, the Bronze Star, and the Air Medal with thirteen oak-leaf clusters. At that point, Ferebee had become “triple rated”—able to serve as a bombardier, navigator, or radar operator. After retiring, he sold real estate in Florida for a while, but he especially enjoyed spending time working in his garden, being with his family, and going to military reunions with his friends Tibbets and van Kirk. Ferebee remained a loyal Tar Heel, returning to the state when possible to visit his brothers and sisters.

When Ferebee died on March 16, 2000, he was buried in the cemetery at the Wesley Chapel United Methodist Church in Mocksville. His headstone is a simple, unassuming government-issued marker indicating the resting place of an American veteran.

At the time of the publication of this article, Tom Belton was the curator of military history at the North Carolina Museum of History. In 2006 he was one of the museum staff members who traveled to Orlando, Florida, to meet with Mary Ann Ferebee and retrieve the Ferebee collection of artifacts.

Lambert, Ted H. "Enola Gay bombardier Thomas Ferebee with the Norden Bombsight on Tinian after the dropping of Little Boy." Uploaded to Wikipedia by the photographer's son. Creative Commons.