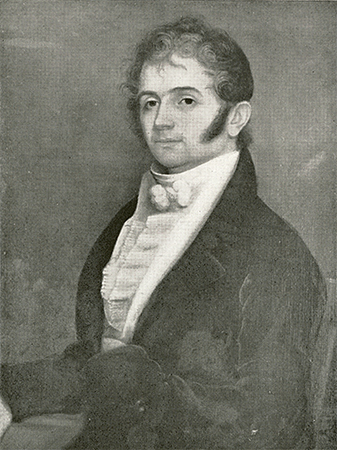 Stephen Lee Ferrand, physician and civic leader of Rowan County, was born in Swansboro, the son of Guillaume (William) Ferrand. The elder Ferrand, who was born in France in 1755 of Huguenot descent, first appeared in Carteret County about 1785; there he bought a large farm on Pettivers (Pettifords) Creek and promptly anglicized the spelling of his given name. Stephen Lee Ferrand's mother was Mary Williams Backhouse Ferrand, widow of John Backhouse and daughter of Colonel John Pugh Williams of Fort Barnwell, Craven County. Named for his uncle by marriage, Colonel Stephen Lee of the White Oak River community, young Ferrand lived with his parents in Swansboro until he moved to New Bern in order to receive further education from the rector of Christ Church. In 1802, at age fifteen, he entered Princeton University as a sophomore and was graduated in 1805. He subsequently entered Columbia Medical College and was graduated in 1808, the same year that his younger brother, William Pugh Ferrand, was graduated from The University of North Carolina.

From Columbia Medical College, Ferrand went to Salisbury where he began a medical practice and became a member of Saint Luke's Episcopal Church. In 1817 he was elected to represent Salisbury, a borough town, in the state legislature.

In 1819 he married Margaret Gillespie Steele, daughter of John Steele; she died on 24 May 1824. Dr. Ferrand was still residing in Salisbury at the time of his death. He left two daughters: Ann Nessfield Steele Ferrand (m. John B. Lord) and Mary Steele Ferrand (m. Archibald Henderson). Through the latter daughter, Ferrand was the grandfather of John Steele Henderson and the great-grandfather of Dr. Archibald Henderson, a mathematician.