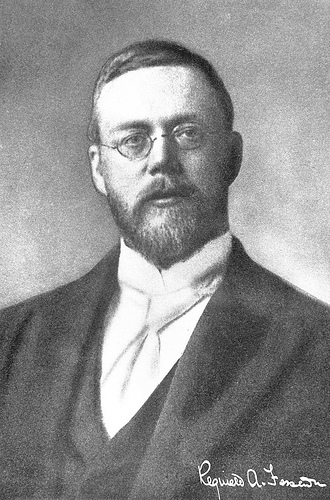 Reginald Aubrey Fessenden, physicist and inventor, was born in East Bolton, Quebec, Canada, the son of the Reverend Elisha Joseph and Clementina Trenholme Fessenden. When Fessenden was nine, the family moved to Niagara Falls, Ontario, where he attended De Veaux Military College; he later continued his studies at Trinity College School, Port Hope, Ontario, and Bishop's College and Bishop's College School, Lennoxville, Quebec. Following two years in his first position as principal of Whitney Institute, Bermuda, he moved to New York as a tester for the Edison Machine Company. Shortly after his twentieth birthday he became one of Edison's assistants at the Llewellyn Park Laboratory. When the Edison companies encountered financial difficulties, Fessenden was laid off and subsequently was employed by the United States Company, the eastern branch of Westinghouse Company. Then after a brief period with the Stanley Company, he was named professor of electrical engineering at Purdue University. A year later he received a similar appointment at Western University of Pennsylvania (University of Pittsburgh), where he taught for seven years.

In 1900, the United States Weather Bureau proposed that Fessenden develop a system to transmit the bureau's weather forecasts. After initial experiments at Cobb Island, Md., during which intelligible speech was transmitted by electromagnetic waves between two masts fifty feet high and one mile apart, the work was moved in December 1900 to Roanoke Island, N.C., with subsidiary stations at Hatteras and Cape Henry weather stations. From headquarters at Manteo, between January 1901 and August 1902, Fessenden developed a system of transmitting sound waves over water between the three stations by means of a liquid barreter of his own invention.

After disagreement with the chief of the Weather Bureau over patent rights, he left the bureau in August 1902 and in November helped create the National Electric Signaling Company to which he transferred all of his patents. From its station at Brant Rock, Mass., the company transmitted voice signals over long distances in 1906. During the same year, Fessenden transmitted two-way trans-Atlantic telegraphy between Brant Rock and Machrihanish, Scotland. On Christmas Eve 1906, he made a memorable broadcast consisting of a short speech and a violin solo. In 1911, he and his associates split over the establishment of a Canadian subsidiary, and the inventor filed suit for breech of contract, forcing the National Electric Signaling Company into receivership.

During World War I, Fessenden's invention of an oscillator led to his association with the Submarine Signal Company. One of his last inventions of a total of nearly 500 was the fathometer, a sonic depth finder for ships. In 1921, he filed suit against the Radio Corporation of America on the grounds that he was prevented from selling devices based on his own patents. The suit was settled in 1928, and Fessenden bought a home in Bermuda.

In his later years, Fessenden began research on the beginning of history—the predeluge civilization. In 1923 he published six chapters of The Deluged Civilization of the Caucasus Isthmus, which was followed by a seventh chapter in 1927. In 1933, his son Reginald compiled additional notes and published four more chapters and several articles. The principal thrust of the book was to tabulate all myths of predeluge history in relation to a major catastrophe—the deluge.

Fessenden died in Bermuda. He was survived by his widow, Helen M. Fessenden, and a son, Reginald Kenneth Fessenden. Photographs of the inventor are in the photographic collection of the North Carolina State Archives, Raleigh.

Belrose, John S. "Fessenden and Marconi: Their Differing Technologies and Transatlantic Experiments During the First Decade of this Century." International Conference on 100 Years of Radio. September 5-7, 1995. Institute of Electrical and Electronics Engineers Canada. http://www.ieee.ca/millennium/radio/radio_differences.html (accessed February 27, 2014).