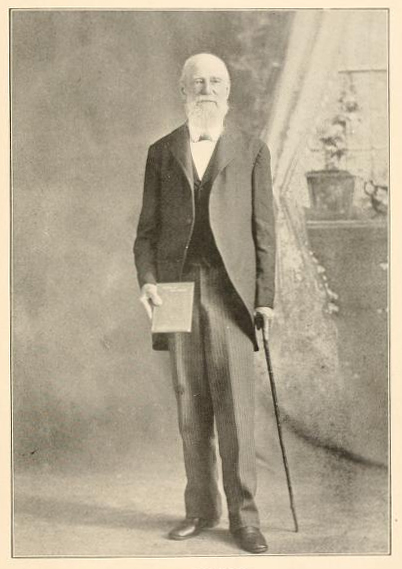 John Frederick Foard, physician, author, and planter, was born in Rowan (now Davie County), the son of Eunice Doomas Bradshaw and Frederick Foard. Orphaned at the age of three, he was reared at Concord in the home of his oldest brother, Major Robert Wyatte Foard, and his wife, Maria Partee Foard. According to his History of the Foard-Bradshaw Families, published in 1905, he attended Jefferson Medical College. Although he practiced medicine in Salisbury in 1860 and in Olin following the Civil War, after 1850 medicine was secondary to his farming, business, religious, and social interests.

Beginning in 1846, Foard acquired over a dozen tracts of land in western Rowan County on Witherow's Creek, Third Creek, Second Creek, and elsewhere and carried on considerable farming operations either himself or in partnership with his older brother, Osborne Giles Foard. The two brothers were instrumental in the formation of a county agricultural society and actively supported agricultural improvements. Perhaps their most successful venture was the construction and operation of Rowan Mills, a steam flour mill near the site of the present town of Cleveland. The two also were partners in the construction of the Western North Carolina Railroad and the Salisbury and Taylorsville plank road through western Rowan. In July 1858, as part of the apparent dissolution of their partnership, Osborne sold his interest in the plank road to his brother and Foard, in turn, sold Osborne his half interest in Rowan Mills as well as other property. A strong advocate of temperance, Foard was worthy grand patriarch of the Sons of Temperance in North Carolina in 1859–60.

Foard, a Methodist, supported that denomination as well as the New Institute (renamed Olin in 1857), a center for Methodism in the antebellum period under the leadership of Baxter Clegg and Brantley York. In 1855 Foard and his brother Osborne loaned the New Institute Association Society $10,000 for the construction and outfitting of a school. A few years after it opened, however, the three-story brick school was on the verge of collapse, owing in part to conflicts within the leadership of the North Carolina Conference. During the war years it was revived through the efforts of Charles Force Deems, who convinced Foard and his brother to provide an endowment. Because of the war, however, the school served only young boys and girls and never became the college that Deems and others proposed. The disillusioned Deems abandoned the project after the war and left North Carolina. A school continued to operate there for a time under James Southgate until the Foards sold the property. The building was pulled down in 1883.

After the war Foard settled at Olin where he was operating a mercantile establishment in 1867. That year he acquired the Powder Springs property northwest of Olin but did not develop the resort, which he renamed Eupeptic Springs, until 1873 when he mortgaged it to Wilfred Turner for $3,000 to raise funds for the construction of a hotel and other resort facilities. Through Foard's efforts, a post office was established at the springs in 1875. The resort apparently was unsuccessful for Foard was unable to repay the loan, and in 1881 Turner acquired the property at a commissioner's sale. As late as 1896 a resort was operated there by J. A. White. About 1895 Foard moved to Statesville where he resided until his death.

While at Eupeptic Springs, he wrote and published North America and Africa, Their Past, Present and Future, a sixty-seven-page pamphlet printed in 1875 in Salisbury by J. J. Brunner. In the pamphlet Foard advocated the colonization of the African American in Africa, a subject that concerned him until he died. It was reprinted in 1877 in Raleigh by J. Nichols. A third edition, printed in 1904 in Statesville by Brady, carried an advertisement for The Advocate of Missions, a monthly magazine to be published by Foard.

J. Edward Smoot, Marshal Ney Before and After Execution (1929).

Statesville The Landmark, 14 May 1909 and scattered issues.