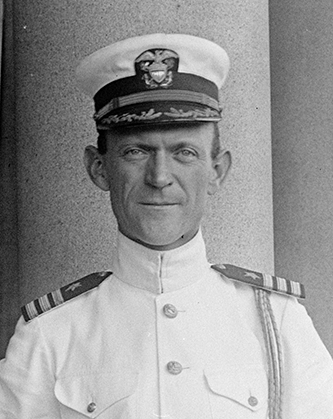 Foote grew up in the brick mansion on the old family plantation. In an insatiable desire for a good education he spent hours in his father's library. He was soon attracted to the Naval Academy from which he was graduated in 1901. As an ensign he saw action in 1905 with troops landed from the Baltimore to protect American interests in Shanghai. In 1906, his highly effective method of fire control resulted in the Baltimore winning the cruiser trophy with a record never before equaled. The Navy Department commended him for the thoroughness and intelligence of his work with his men. His sharp practical insight into every task and his knack of evoking intense loyalty and zealous devotion to duty from his men remained a mark of the man thereafter.

When lieutenant, Foote was a chief engineer of the battleship Louisiana from 1909 to 1912. Though lacking engineering skills he acquitted himself so well that he was chosen for the highly technical duties of inspector of engineering materials at General Electric's plant in Schenectady, N.Y., during the period 1912–15. Enthused with the potentials of electricity, he presented in 1913 to acting navy secretary Franklin D. Roosevelt his study, "Turbine Electric Propulsion of a Battleship Compared with Other Means." His recognized authority and keen perceptions were influential in the Navy's adoption of this concept in 1914, an important milestone in naval history.

After becoming lieutenant commander, Foote was given the choice assignment of gunnery officer of the battleship Nevada, the Navy's most powerful vessel when launched on 11 July 1914. He is best known for his heroic command of the troop transport President Lincoln. Returning from its fifth voyage with seven hundred aboard, including wounded, it was torpedoed on 31 May 1918 and sank in 18 minutes. But because of his superb emergency procedures and drills (later adopted for the entire Troop Transport Service) only twenty-six perished. Though together a scarce eight months, the crew was so disciplined and devoted to its rescue and fighting duties that the ship's guns were blasting almost to final submersion. He received a special commendation from navy secretary Josephus Daniels; the Silver Star Medal for gallantry in action; and the Distinguished Service Medal. The Navy Department memorialized this epic with a painting, which the survivors' USS President Lincoln Club depicted in a handsome bronze plaque in memory of those who lost their lives. Both are now in possession of the curator of the Department of the Navy. A vivid description is preserved in Commander Foote's "Narrative of the President Lincoln."

For his gallant conduct Secretary Josephus Daniels chose him as aide during 1918 to 1921, and found him "efficient in the highest degree." During this time, King Albert of Belgium visited the United States and personally bestowed on Foote the Belgian Order of the Crown medal.

There followed many sea assignments during which Foote commanded almost every type of naval vessel; wrote his third useful study, "Engineering—Its Value to the Captain" (1923); became captain (1 Jan. 1924); was graduated from the Naval War College (1929); and served twice at Washington's Naval Gun Factory, first as inspector and later as senior inspector. There, using his vast sea experience and technical knowledge, he designed a number of important ordnance changes, some remaining useful during World War II and beyond. In 1933, while commanding the battleship Arkansas and the training squadron of the fleet's scouting force, he was cited by the fleet commander, Admiral R. H. Leigh, for relief work in the Long Beach, Cal., earthquake disaster. This was the twenty-seventh citation on his record.

Foote's last three years in the navy were spent ashore at the Philadelphia Navy Yard as chief of staff of the Fourth Naval District. He was promoted to rear admiral and retired on 30 June 1936. He continued living in the Philadelphia area. Soon Pennsylvania Governor George H. Earle tapped him to be police commissioner to combat the mounting traffic death toll. In an outstanding two-year record, Foote reduced it over 40 percent and received the Pennsylvania Meritorious Service Medal.

He returned to North Carolina, making his home in Chapel Hill. In May 1942, he was recalled to active duty as senior inspector of the newly created Eighth Naval District coving Arkansas, Oklahoma, Louisiana, and Texas. With his usual energy and understanding, he soon had this cotton-oil-cattle country so highly geared to the war effort that, from January 1943 to May 1944, it averaged shipments of $50 million monthly, excluding shipbuilding.

At the war's end, with forty years of distinguished public service behind him, Foote again retired, this time living in Charlotte. He died there and was buried at Arlington National Cemetery, Washington, D.C.

On 1 Oct. 1910 Foote married Genevieve Clary of Great Falls, Mont. She died on 27 July 1969. Surviving were a son, Colonel Thomas Clary Foote, USA; a daughter Diana, wife of Brigadier General James F. Lawrence, USMC; and several grandchildren. A portrait is in possession of his son. He was a Democrat, Episcopalian, and Mason and a member of the Army and Navy Club, the New York Yacht Club, and the Sons of the American Revolution.

Bureau of Naval Personnel, Department of the Navy, Washington, D.C., for service and other records.

Journal of the American Society of Naval Engineers 27 (1915).