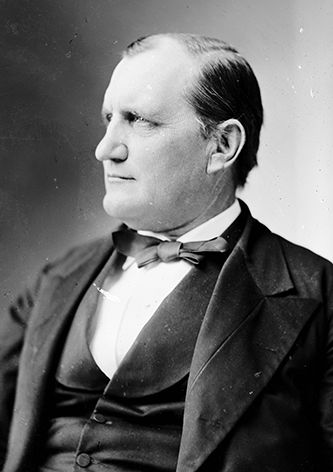 William Henry Forney, lawyer, congressman, and Confederate soldier, was born in Lincolnton, the son of Jacob and Sabina Swope Hoke Forney and the grandson of General Peter and Nancy Abernathy Forney. Peter Forney, a native of Lincoln County, led a partisan corps in the American Revolution; he also was a member of the North Carolina House of Commons (1794–96), a state senator (1801–2), a congressman (1813–15), and an elector during the presidential campaigns of Jefferson, Madison, Monroe, and Jackson. William's granduncle, Daniel Hoke Forney, also represented North Carolina in Congress. Of William's brothers, John Horace became a major general in the Confederate army; George Hoke became lieutenant colonel of the First Confederate Battalion and was killed at the Battle of the Wilderness in 1864; and Daniel P. became major of the Second Alabama Regiment.

In 1835, the Forney family left North Carolina and settled in Calhoun (then Benton) County, Ala. Here young William grew to manhood, being six feet tall with a stout frame. He entered the University of Alabama at Tuscaloosa and pursued classical studies. After he was graduated in 1844 with an A.B. degree, he studied law in the office of his older brother Daniel in Jacksonville, Ala. At the outbreak of the Mexican War, William enlisted for a year in Colonel John R. Coffee's First Alabama Volunteers and served as a lieutenant during the siege of Vera Cruz. At the end of his enlistment period he returned to Jacksonville and resumed the study of law under T. A. Walker. Admitted to the bar in 1848, Forney formed a partnership with James B. Martin of Talladega and practiced until 1859, when he represented Calhoun County in the state legislature.

At the outbreak of the Civil War, Forney entered Confederate service as captain of a company of the Tenth Alabama Regiment, organized on 4 June 1861. On 3 July the regiment was sent to Virginia where on 20 December, while doing detached duty, it participated in a sharp engagement at Dranesville. In this encounter, Captain Forney was severely wounded in the leg and unable to resume command for some two months. The day after the engagement, however, he received a commission as major of the regiment. On 16 Mar. 1862, he was promoted to lieutenant colonel. The regiment then serving in Wilcox's Alabama Brigade, Longstreet's division, Forney participated in the fighting around Yorktown. In the rearguard action at Williamsburg he was severely wounded in the right shoulder. Taken to William and Mary College, which was being used as an improvised hospital, he was captured by Union soldiers and held prisoner for four months.

On returning to his regiment he discovered that his brother-in-law, Colonel John J. Woodward, who commanded the regiment, had died and that he had succeeded him as colonel. In this capacity, Forney led the Tenth Alabama at Fredericksburg, Chancellorsville, and Salem Church where he was slightly wounded in the leg. Again leading the regiment at Gettysburg, he received flesh wounds in the arm and chest. Soon his right arm—the one injured at Williamsburg a year earlier—was shattered and he collapsed in shock. While lying prostrate on the field, a shell blew away one-third of his ankle bone. In this dire condition he fell into enemy hands and was imprisoned for thirteen months in Fort Delaware, Baltimore, Md. He was then selected as one of fifty Confederate officers to be sent to Morris Island near Charleston, S.C., and exposed to the fire of Confederate batteries as a retaliatory measure. Afterwards he was sent to Port Royal, S.C., for the same purpose; however, the retaliation differences were finally worked out and Forney was exchanged. Hobbling on crutches, he returned to Lee's army to join his regiment in the siege of Petersburg. He soon found himself in command of the old Alabama brigade in which his regiment served. The brigade contained the Eighth, Ninth, Tenth, Eleventh, and Fourteenth Alabama regiments. On 23 Feb. 1865, he was promoted to brigadier general to rank from 15 February (confirmed 23 February). Forney led the brigade at Hatcher's Run and, in the retreat to Appomattox, in the battles of High Bridge and Farmville. At Appomattox, he surrendered the 952 officers and men of his brigade, one of the largest left in Lee's army, and was paroled.

Returning to Jacksonville after the war, Forney resumed his law practice broken in body, having been wounded thirteen times in battle, but undaunted in spirit. In 1865 he served in the state senate, but under the shackles of Reconstruction he was denied his seat. After the carpetbaggers were overthrown in the state, Forney was elected on the Democratic ticket to serve in the Forty-fourth Congress. Beginning on 4 Mar. 1875, he served and was reelected to eight succeeding congresses ending on 3 Mar. 1893. He was not a candidate for reelection in 1892. Forney was also appointed a member of the Gettysburg Battlefield Commission by President Grover Cleveland and served until his death. He died in Jacksonville and was buried there in the city cemetery.

On 4 Oct. 1854 Forney married Mary Eliza Woodward, the daughter of E. L. Woodward, a prosperous merchant of Calhoun County. They had two sons and three daughters.