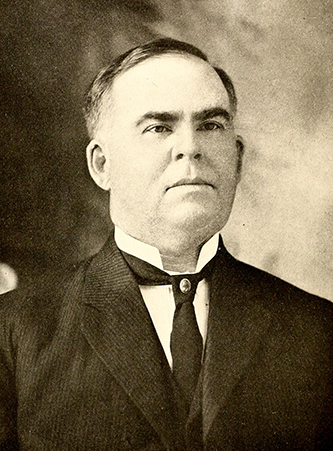 John Edgar Fowler, congressman, was born on his family farm in Honeycutts Township, Sampson County, the son of Miles Beatty and Mary Victoria Herring Fowler. He was a direct descendant of John Fowler (1747–1844), a soldier of the American Revolution, and of Richard Herring of Sampson County who operated a gun shop for the patriots during the Revolution. Young John Fowler was educated in the common schools in his home community and later in Salem Academy in Salemburg. After attending Wake Forest College for two years, he taught school near Salemburg for a year. He studied law at The University of North Carolina from 1892 to 1894, was admitted to the bar in 1894, and began to practice in Clinton.

Fowler was first a Democrat, but in 1894 he joined the Populist party and was elected in the same year to the North Carolina Senate. He advocated the regulation of railroads, the increased support of public education, the establishment of agricultural and normal colleges, and the reform of the election laws. In the legislature he served on the judiciary, privileges and elections, insane asylums, and banking and finance committees. He was the author of a bill passed on 5 Feb. 1895 that fixed the legal rate of interest at six percent.

In 1896, Fowler was elected as a Populist to the U.S. House of Representatives from his home district and served from 4 Mar. 1897 to 3 Mar. 1899. In Congress he supported legislation in keeping with the Populist and Republican platforms as well as the Spanish-American War. In the election of 1898, he was defeated in his bid for another term in the House.

After the collapse of the Populist party in North Carolina, Fowler aligned himself with the Republican party. He represented Sampson County in the lower house of the legislature in 1905, after which he returned to his law practice in Clinton. Though a loyal Republican, he endorsed Alfred E. Smith for president in 1928.

Fowler never married. A Baptist and a Mason, he was buried in the Clinton Town Cemetery.

John A. Oates, The Story of Fayetteville and the Upper Cape Fear (1950).