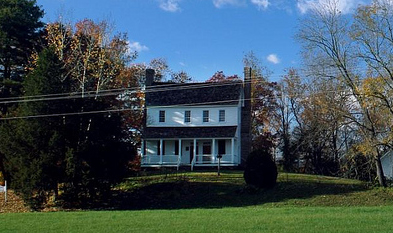 Meshack Franklin, congressman and legislator, was born in Orange County, Va., the son of Bernard and Mary Cleveland Franklin. In 1778 his parents sent their eldest son, Jesse, to North Carolina to find a suitable place for a new family home. Jesse selected a location near the headwaters of the Mitchell River where Meshack grew to maturity, the fifth of eight children. He received little formal education but apparently overcame this handicap, for as an adult he wrote with considerable facility.

Like his brother Jesse, Meshack became interested in politics as a young man. In 1800 and 1801 he served as a representative in the North Carolina legislature, and from 1807 to 1815 he represented the state in the U.S. House of Representatives. In Congress Franklin spoke rarely. A Democratic-Republican, he espoused a political philosophy much like that of Nathaniel Macon, who sat with him in the North Carolina delegation in the House. He believed strongly in popular government and wrote vigorously in support of the popular election of the president. In 1828–29 and 1838, he served in the state senate, and in 1825–28, 1832–33, and 1835, he was a councillor of state. Neither as a state nor as a federal official were his accomplishments great.

Franklin married Mildred Edwards, and the couple had eleven children who reached maturity: sons Gideon, Columbus, Jesse, and Hardy; and daughters Anne, Sarah, Mary, Martha, Mildred, Frances, and Meeky. A prosperous farmer, he left a substantial estate at the time of his death.

Meshack Franklin, To the Freemen of the 13th Congressional District of the State of North-Carolina (1825).

William Lenoir, To the Citizens of the 12th Elective District, in the State of North-Carolina (1806).

General Assembly of North Carolina "An Act to Appropriate Funds for the Restoration of the Edwards-Franklin House in Surry County." 1981. https://www.ncleg.net/EnactedLegislation/SessionLaws/PDF/1981-1982/SL1981-1374.pdf (accessed March 4, 2013).