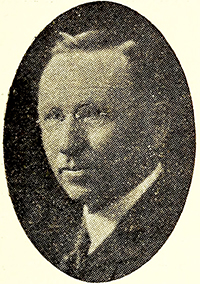 Walter Murchison Gilmore, clergyman and Baptist publicist, was born on a farm in Lee County, three miles from the town of Sanford, the son of David Chandler and Margaret Frances Murchison Gilmore. He attended the Jonesboro public schools, Mount Vernon Springs Academy in Chatham County, and Sanford High School, from which he was graduated in 1886. After one year as an assistant teacher at Sanford High School, he entered Wake Forest College in 1887; four years later he was graduated with the bachelor of arts degree. In 1891 he became a high school principal. He also served for seven months as pastor of the Cool Springs Baptist Church, near Jonesboro, which he had joined in November 1882. He had been licensed to preach by the same church in August 1887 at age eighteen. At the request of the Cool Springs church, he was ordained a Baptist minister on 1 Oct. 1892 at Bethlehem Baptist Church, Moore County. The examining and ordaining presbytery was appointed by the Sandy Creek Baptist Association.

Gilmore enrolled at the Southern Baptist Theological Seminary, Louisville, Ky., in October 1892 and was graduated with a bachelor of theology degree in May 1894. From the seminary he went to Brunswick, Ga., as pastor of the First Baptist Church (1895–1904). He then served in Baptist pastorates at Marshallville, Eastman, and Atlanta, Ga., between 1904 and 1911; and at Louisburg and Sanford, N.C., between 1911 and 1923.

Early in 1923, he became secretary of stewardship and missions of the North Carolina Baptist State Convention, with headquarters in Raleigh, where he had held leadership positions for more than twelve years. He was assistant recording secretary (1914–15), and then recording secretary, a post he held from 1916 to 1929. During those years he also became a publicist for the convention and Baptist work in general. He wrote many articles for the Biblical Recorder, served as reporter for press services and newspapers covering various convention sessions, and wrote and edited countless tracts, pamphlets, and promotional brochures on convention activities.

During his pastorates in Georgia, Gilmore was clerk of the Piedmont and New Ebenezer Baptist associations. His comprehension of denominational organization was vast and his capacity to interpret the denomination's plans and programs was early recognized and utilized. In every community where he served as pastor, he had been active in civic affairs both as a trustee of numerous educational institutions and as a member of multiple committees and boards of the denomination. In 1918–19 he served as publicity director for the North Carolina Baptist Million-Dollar Campaign to support Baptist schools and colleges in the state. In late 1919 this campaign was merged with the Southern Baptist Seventy-Five-Million-Dollar Campaign "to provide greatly increased support for all Baptist missionary, educational and benevolent work in the states and the Southern Baptist Convention, and set a new pattern for Baptist cooperation." It accomplished both of those goals, and a large portion of the success in North Carolina, which received $5.5 million from the effort, is credited to Gilmore's effective use of every media available to publicize the campaign.

As a result of his outstanding work for the North Carolina Baptist State Convention, he was called to Nashville, Tenn., in 1930 to become director of publicity, and later treasurer of the executive committee, of the Southern Baptist Convention headquarters' operation. For the next fourteen years he developed an innovative program of denominational publicity as editor of The Baptist Program, director of the Baptist Bulletin Service, and press representative for the convention. He dispensed news to the Baptist and secular press of the several states and developed a completely new type of publicity service that provided advance copies of all addresses and reports, as well as day-to-day coverage of the annual meetings of the convention. He was an indefatigable worker until his death at the age of seventy-seven. He was the author of Seven Marks of a Good Steward (n.d.).

On 4 Nov. 1903 Gilmore married Mary Estelle Taylor, the daughter of John W. and Laura China Taylor of Dunn. They had one son, Walter Sledge Gilmore (b. 6 Aug. 1907), himself a graduate of Wake Forest College and the Southern Baptist Theological Seminary.