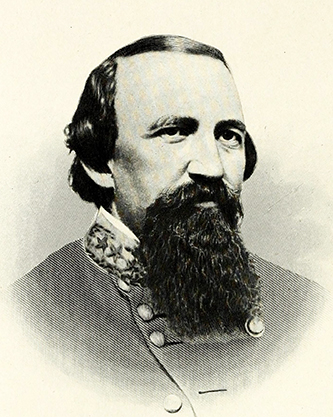 James Byron Gordon, merchant, farmer, politician, and Confederate soldier, was born at Wilkesboro. His family, of Scottish descent, was founded by John George Gordon who emigrated from Scotland in 1724 and settled first in Maryland and finally in Spotsylvania County, Va. Two of the sons of John George Gordon's large family, George and Charles, later moved south and settled in Wilkes County. Charles Gordon was the great-grandfather of Major General John Brown Gordon, a Confederate general who served in the infantry of Lee's army. George Gordon fought in the Battle of Kings Mountain; his son Nathaniel represented Wilkes County in the General Assembly. Nathaniel married Sarah Lenoir Gwyn and their son was James Byron Gordon. Nathaniel Gordon died when James was about six years old.

At age ten, young James went to the school of Peter Stuart Ney at Hunting Creek in Iredell County but left after two years because of ill health; he subsequently did light chores on the family farm. At age eighteen Gordon entered Emory and Henry College, Va. Although he did not take the regular course, he remained there for two or three years before returning to Wilkesboro and entering the mercantile business. Gordon also supervised the farm he inherited from his father, and became involved in local politics, representing Wilkes County in the General Assembly in 1850. When the Civil War broke out in 1861, he enlisted as a private in the Wilkes Valley Guards on 9 May. The company was reorganized with Montford S. Stokes as captain and Gordon as first lieutenant. When it became Company B of the First North Carolina Regiment, Captain Stokes was elected colonel of the regiment and Gordon succeeded him as captain of Company B. Later, however, the First North Carolina Cavalry (Ninth North Carolina Regiment) was organized and Gordon was appointed its major. North Carolina heroes Robert Ransom and Laurence S. Baker served as colonel and lieutenant colonel, respectively.

The First North Carolina Cavalry was to become one of the finest cavalry regiments to serve in the war, with some fifty actions to its credit. After the regiment was organized, it was sent to Virginia where, on 26 Nov. 1861, it fought its first engagement at Vienna. In March 1862 the regiment was sent back to North Carolina to meet Union forces under Ambrose Burnside; it returned to Virginia in June to face McClellan's Union army, which was threatening Richmond. Meanwhile, Colonel Ransom transferred to the infantry, Laurence S. Baker became colonel of the regiment, and, on 3 Apr. 1862, succeeded Baker as lieutenant colonel. Participating in the Seven Days' battles before Richmond (26 June–2 July, 1862), the First North Carolina Cavalry served in the brigade of famous Confederate General "Jeb" Stuart. On 29 June the regiment was ordered to make a reconnaissance of the Union line of retreat at Willis' Church, resulting in a bloody engagement with Union infantry and cavalry. The regiment continued service as part of General Wade Hampton's brigade of Stuart's cavalry, participating in the campaigns of Second Manassas, Sharpsburg, Fredericksburg, and Chancellorsville, as well as in Stuart's "Horse Raid" into Pennsylvania. Gordon commanded a detachment of the regiment that took part in Hampton's raid on Dumfries in December 1862. In these actions he was frequently complimented by Stuart for his courage and leadership. Gordon was one of many officers in Lee's army to become an outstanding military leader with no previous military experience, and he easily became one of General Stuart's favorites.

On 9 June 1863, Union cavalry attacked at Brandy Station to begin the bloodiest cavalry engagement of the war. In the battle, the First North Carolina Cavalry had a conspicuous part in driving back the enemy forces. Afterward the regiment accompanied Stuart on his controversial raid around the Union Army in the Gettysburg campaign. In the cavalry engagement in the rear of the Union army at Gettysburg on 3 July 1863, General Hampton was wounded and Colonel Baker succeeded to the command of his brigade. Lieutenant Colonel Gordon found himself temporarily in charge of the regiment and continued in this capacity during the retreat of the Confederate Army to Virginia. At Hagerstown, Md., he met and repulsed a Union attack with a fragment of the Fifth North Carolina Cavalry. Of this General Stuart was to write in his report of Gordon: "that officer exhibiting under my eye individual prowess deserving special commendation." On 11 Aug. 1863, Gordon was made colonel and assigned to the Second North Carolina Cavalry (Nineteenth North Carolina Regiment), replacing its former commander, Colonel Sol Williams, who was killed at Brandy Station. He was shortly transferred back to the First North Carolina Cavalry, however, and later commanded Hampton's old brigade in the Battle of Jack's Shop on 22 Sept. 1863.

In the meantime, Colonel Laurence S. Baker, the First North Carolina Cavalry's former commander, had been promoted to brigadier general and placed in command of a new brigade composed exclusively of the First, Second, Third, and Fifth North Carolina Cavalry regiments; however, he had been so badly wounded in action as possibly to be invalided from further field service. To succeed him the choice of both generals Lee and Stuart fell on Colonel Gordon, who was promoted to brigadier general on 28 Sept. 1863, to rank from the same date (confirmed 17 Feb. 1864), and given command of the North Carolina cavalry brigade. His first opportunity to lead his new command in battle was not long in coming, for in October he accompanied Lee's army in its pursuit of Meade's Union army from near Culpeper Court House. On 10 Oct. 1863, Gordon drove back a Federal force at Bethesaida Church. Three days later his command was part of a column under General Stuart that was cut off and surrounded by moving columns of retreating Union infantry. The following morning Stuart attempted to cut his way out of the trap, and Gordon called on the First North Carolina Cavalry to attack and hold off the Union forces while the rest of Stuart's command escaped. This was done and the whole of Stuart's force was able to get away though Gordon himself had been slightly wounded when a bullet grazed his nose, breaking the skin and causing some profuse bleeding. On 16 October, Gordon commanded in an engagement on Bull Run. In November he led the center in what was known as the "Buckland Races" and was active in the Mine Run engagements, having his horse shot out from under him at Parker's Store.

At the beginning of March 1864, he took part at Atlee's Station in turning back Kilpatrick's and Dahlgren's raid on Richmond. On 4 May 1864, there began the great Wilderness campaign as Grant's Union army moved southward for Richmond. Gordon's outposts were the first Confederate units to make contact with the Union Army as it crossed the Rapidan River. Gordon served through the Battle of the Wilderness and at the beginning of the Battle of Spotsylvania. On 9 May, Union General Sheridan began his famous drive on Richmond with some 12,000 Union cavalrymen. To check this threat, Stuart hurried ahead with two brigades to intercept Sheridan's raiders while Gordon and his own brigade were instructed to harass the rear of the raiding column and slow it down as much as possible. Gordon did admirable work to this end, though it involved almost constant riding and fighting day and night. Stuart was able to get ahead of Sheridan and confront him at Yellow Tavern, outside Richmond, on 11 May 1864. Though Stuart's command was overpowered and he himself was mortally wounded, Sheridan was forced to turn back. Just before his wounding at the height of the battle, Stuart was heard to mutter: "Would to God, Gordon were here." Gordon had been following and harassing the rear of Sheridan's column all this time and had beaten it at Ground Squirrel Church on 10 May. On the twelfth, he again confronted Sheridan at Meadow Bridges near Brook Church. Here he fought with reckless courage, remaining mounted though bullets flew about him and urging his men to hold on until infantry reinforcements came up to relieve them.

Just before his exhausted little command was relieved late in the evening, Gordon was struck by a minie ball in the arm, ranging out at the elbow. At first the wound was not thought too serious but he lived only a few days, dying in the officers' hospital in Richmond. His remains were taken back to Wilkesboro where he was buried at the Episcopal church. Gordon left no heirs to carry on his name. He was truly one of the finest soldiers North Carolina produced.

Samuel A. Ashe, ed., Biographical History of North Carolina, vol. 8 (1917), and Cyclopedia of Eminent and Representative Men of the Carolinas of the Nineteenth Century (1892).

William H. Cowles, Memorial Address on the Life of General James B. Gordon (1887).

War of the Rebellion: Official Records of Union and Confederate Armies, vol. 2 (1885).