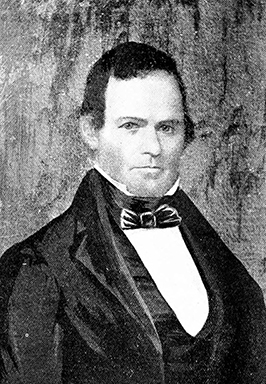 James Graham, congressman, lawyer, and planter, was born in Lincoln County, the fourth child and second son of Joseph (1759–1836) and Isabella Davidson Graham. His paternal grandfather, for whom he was named, immigrated from Ireland in 1714. His father was a veteran of the American Revolution, sheriff of Mecklenburg County, state senator, iron manufacturer, planter, and general during the War of 1812. A younger brother, William A. Graham (1804–75), was a U.S. senator, governor of North Carolina, secretary of the navy, Whig candidate for vice-president in 1852, and Confederate senator.

James Graham was graduated from The University of North Carolina in 1814 and read law with Thomas Ruffin of Hillsborough. In 1818, he was admitted to the bar and began to practice in Rutherfordton. He represented his county in the House of Commons in 1822–24 and again in 1828–29. In Raleigh he was identified with the supporters of William H. Crawford in 1824, but by 1828 he was in the ranks of President Adams. In the General Assembly he advocated internal improvements and revision of the state constitution.

In 1825 Graham made his first bid for a seat in Congress. The incumbent, Robert B. Vance, and another candidate, Samuel P. Carson, were both Jackson men, whereas Graham was opposed to Jackson. Carson won, with Graham second. By 1833, Carson had become an advocate of nullification and Calhoun and opposed Jackson. David Newland, a loyal Jackson man, and Graham, now a supporter of Henry Clay, vied for Carson's seat and Graham won the three-way contest. Two years later Graham defeated Newland by a margin of just seven votes. Newland contested the result, and the House of Representatives, controlled by Democrats, voted to unseat Graham. A special election was held in August 1836 and Graham was returned by a safe margin. He faced no serious opposition in 1837 or 1839 and defeated Thomas L. Clingman in 1841. By 1841 a split was developing between states' rights Whigs, who were loyal to John Tyler, and national Whigs, who backed Henry Clay as party leader. Clingman, as a states' rights Whig, captured the Whig nomination in the mountain district and forced Graham out of Congress. Two years later Graham ran as an independent Whig with Democratic support and defeated Clingman one final time by a margin of 326 votes. But political tides were changing. States' rights Whigs were fusing an alliance with Democrats to overwhelm the national Whigs. Clingman regained the mountain district seat in the Thirtieth Congress as a Democrat and held it for a decade. In Congress Graham served at different times as a member of the Indian affairs, claims, District of Columbia, naval affairs, and territories committees. His political convictions generally coincided with those of Henry Clay.

Leaving Congress in March 1847, Graham devoted his final years to managing his Earhart plantation in Rutherford County and his South Point plantation on the edge of South Carolina below Charlotte. Friends tried to persuade him to oppose Clingman again and he considered a move to the West, but an old throat affliction gradually grew worse and within a short time he died at South Point. He never married.