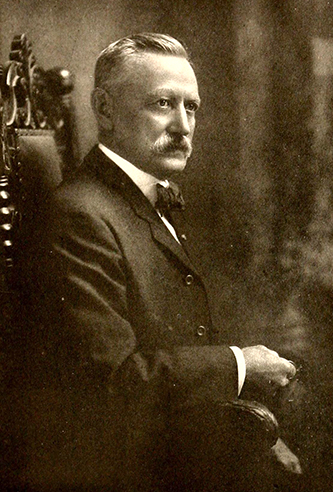 Hiram Lewis Grant, soldier, legislator, and businessman, was born in Woonsocket, R.I., the son of Lucinda C. Brown of Connecticut and John S. D. Grant, a superintendent of cotton mills. He was educated at the public schools and the academy at Woodstock.

Grant enlisted as a private in Company A, Sixth Connecticut Volunteer Infantry on 3 Sept. 1861 and gradually rose in rank to major. On 23 July 1863, he was one of twenty volunteers sent to silence the guns of Fort Wagner on Morris Island at Charleston harbor. Seriously wounded in the action, he was awarded the medal of honor by General Q. A. Gillmore on 23 Aug. 1863. After being confined for eight months to a hospital in Beaufort, N.C., Grant was reassigned to the staff of General Joseph R. Hawley of the Tenth Army Corps and served in that position during the entire Virginia campaign. Grant commanded a portion of the Union troops that made the successful assault on Fort Fisher in January 1865. Subsequently he was appointed provost marshal of Wilmington and later of Goldsboro. Grant was honorably discharged from the army on 24 Aug. 1865. During the Spanish-American War he returned to active duty for thirteen months as paymaster in the District of Columbia, Puerto Rico, and New York City.

Favorably impressed with the small town of Goldsboro, Grant settled there after the war and made it the center of his political activities. In 1868, he served as a delegate to the North Carolina Constitutional Convention. In 1869 he was appointed postmaster of Goldsboro, a position he held for seventeen years. Grant had a great interest in public education. He was a trustee of the Colored Normal School and established the first public school in Goldsboro. Having obtained the gift of an old building from the Fair Association, he moved it to his own property, rebuilt and furnished it as a schoolhouse and donated it to the city. In 1894 Grant was elected without his consent to the North Carolina Senate, and in 1896 he was reelected. As chairman of the Senate Committee on Education, he aided in the establishment of graded schools in the east. In November 1899, he was appointed clerk of the U.S. District Court for the Eastern District of North Carolina. He supervised four deputy clerks in Wilmington, New Bern, Washington, and Elizabeth City until 1913. He was once a caucus nominee for sergeant-at-arms of the U.S. Senate, but he lost by one vote.

Grant was also a leading businessman of Goldsboro. In 1874, he purchased from W. R. Lane most of the lots of the abandoned town of Waynesborough. On this property, located on a clay hill on the Neuse River, Grant established a brick manufactory which became his chief business. He was also president of H. L. Grant Realty Company and of H. L. Grant and Son, dealers in farm and city property. In 1913, he erected the six-story, fireproof Grant Office Building in Goldsboro; it is now the educational building of the First Baptist Church.

On 2 Dec. 1868 he married Elizabeth ("Lizzie") E. Greene (b. 1844), the daughter of Hannah Elliott and John J. Greene of Putnam, Conn. The following year Grant and his bride moved to Goldsboro, where they resided on William Street. They had five children: John Hiram, a Congregational minister in Elyria, Ohio; Emelyn (Mrs. Daniel Gay of Worcester, Mass.); Mabel (Mrs. J. F. Bowles of Statesville); Minnie E. (Mrs. C. E. Wilkins of Charlotte); and Louis N. of Greenwich, Conn. A graduate of Music Vale Seminary in Salem, Conn., Lizzie Greene Grant spent much of her life supporting the music program of the First Baptist Church of Goldsboro. She was also a charter member of the Women's Missionary Union organized in Goldsboro about 1891, and for many years she was vice-president of the Neuse Atlantic Baptist Association WMU. She died on 10 Jan. 1913 in Philadelphia after an operation.

Grant's community life revolved mainly around the church. Baptized in the First Baptist Church in 1874, he became an active deacon and Sunday school superintendent. He was also a member of the Grand Army of the Republic and the Loyal Legion. A liberal benefactor in his community, Grant died in Goldsboro and was buried in Willow Dale Cemetery.