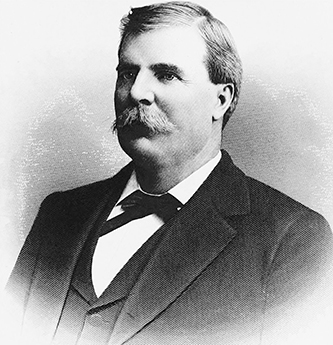 John Wesley Hanes, industrialist and civic leader, was born in Fulton, Davie County. The Hanes family in the United States began with Philip Höhns (the phonetic spelling "Hanes" soon came into use) who arrived from Germany with his son Marcus to settle in York County, Pa., in 1738. In 1748 Marcus, a member of the Reformed church, married Anna Kerber, a Lutheran, and the two soon joined the Moravian congregation in Lancaster. In 1774, they moved with their ten children to 1,060 acres of land in Friedberg near the North Carolina Moravian settlement of Salem. One of the children, Philip, located near Clemmonsville and married Johanna Salome Frey, from which union was born Joseph, who settled in Fulton. The marriage of Joseph Hanes to Catherine Sehner (varied spellings) produced two sons, George and Alexander Martin Hanes. The latter continued in Fulton where he operated a farm and, among other businesses, one of the largest tanneries in that section of the state. Alexander Martin Hanes married Jane March, daughter of Jacob and Margaret Hinkle March. John Wesley Hanes was their sixth son in a family of eleven children.

In 1861, Alexander Martin Hanes died. The Civil War cost the lives of three of John Wesley's brothers—Spencer, Jacob, and George. A fourth brother, Pleasant Henderson Hanes, served as a courier for General Robert E. Lee and surrendered with him at Appomattox. John Wesley remained at home to help manage the family farm, which was now on Hickory Hill near Mocksville. During the war he received most of his secondary education from his mother and from books in the home. For a time after the war, he attended Trinity College (later Duke University).

In 1872, Hanes joined with his brother Pleasant Henderson and a Davie County friend, Thomas Jethro Brown, to organize P. H. Hanes and Company to manufacture tobacco. Pleasant Hanes had returned from the Civil War to establish a wagon trade in tobacco; it was so successful that he became a partner in the tobacco manufacturing firm of Dulin and Booe in Mocksville. His prowess as a salesman and the managerial skills of John Wesley made the entrepreneurial venture promising. When the business burned in 1874, Brown left the organization, to be replaced briefly by a younger brother, Benjamin Franklin Hanes. After the fire the company operated in Greensboro while rebuilding in Winston. With Pleasant often traveling to promote the market and John Wesley remaining at the plant to attend to the manufacturing process, P. H. Hanes and Company became by the 1800s one of the leading flat-plug producers in the country. By the 1890s, the company was increasingly pressed by James B. Duke's American Tobacco Company to consolidate the industry. After resisting for several years, the Hanes brothers sold their business to Duke's American Tobacco trust through Richard Joshua Reynolds who was one of its independent partners.

Though the brothers could have retired on the yield from the sale of their tobacco company, they chose instead to apply their entrepreneurial talents to the rising field of knitwear. Pleasant joined with two sons to establish the P. H. Hanes Knitting Company for the manufacture of men's and boys' underwear. In 1901, John Wesley Hanes opened the Shamrock Hosiery Mill to make infants' and men's socks. Named Hanes Hosiery Mills in 1914, the company grew to be the largest producer of circular knit hosiery in the world. Its management would later pass to his son, James Gordon.

In addition to his manufacturing activities, John Wesley Hanes served as president of the Roanoke and Southern Railroad and was on the board of directors of several banks in the thriving Piedmont area.