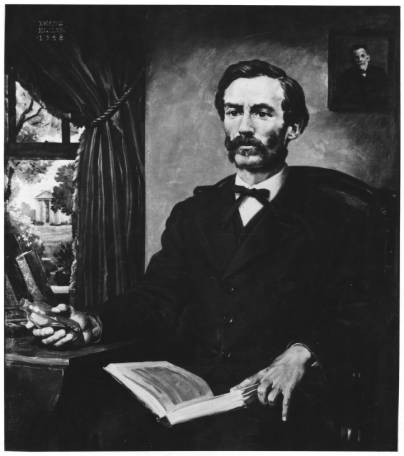 Thomas West Harris, physician, educator, and first dean of The University of North Carolina Medical School, was born in Chatham County, the son of Thomas Brooks and Nancy Clegg Harris. His father was a planter, stock raiser, and large slave owner. Following his early education, Harris enrolled at The University of North Carolina where he was one of four honor graduates in the class of 1859.

At the outbreak of the Civil War, Harris enlisted as a private in the Confederate Army, serving in the Pittsboro company known as the Chatham Rifles. Subsequently, he was commissioned as captain to organize and command Company E, Sixty-third Regiment, Fifth North Carolina Cavalry, a unit that served with General Robert E. Lee during the Battle of the Wilderness in Virginia. Harris received a serious gunshot wound at the Battle of Dinwiddie Courthouse during Lee's evacuation of Petersburg, and he returned home to recuperate as the war came to an end.

With the collapse of the Confederacy, Harris decided to pursue a medical education in Europe. After his marriage to Sally M. Foust in the autumn of 1865, he moved to Paris, France, where he studied surgery and anatomy under Dr. D. Velpeau at L'hôpital de la Charité. Harris was awarded his certificate from Velpeau in late 1866, returned to America, and received the M.D. degree from New York University in 1868. He then returned to North Carolina, where he practiced medicine in the eastern part of the state and later in Chatham County.

In the autumn of 1877, Harris moved to Chapel Hill and established a large practice in the village and surrounding rural community. Concerned about the shortage of qualified physicians in North Carolina, in 1878 he began teaching private courses in anatomy and materia medica. On 12 Feb. 1879, The University of North Carolina executive committee formally established the School of Medicine and appointed Harris as its first dean and professor of anatomy. The curriculum provided two years' instruction in basic medical and clinical science to prepare students for more advanced studies at major medical institutions outside the state. In addition to lectures by Harris, the first year of study included instruction in chemistry by Professor A. Fletcher Redd and in physiology by Professor Frederick W. Simmons. During the second year, Harris taught materia medica, therapeutics, surgery, and anatomy, which included human dissection and the use of a large collection of models. Lectures were delivered in Old West Hall, and dissections were performed in a small building near the site of present Venable Hall. Harris conducted free clinics each week, allowing students to observe and treat a variety of diseases. Unfortunately, the university was unable to provide a salary for Harris, who was thus forced to devote much of his time to private practice. In recognition of his contributions to medical education, the institution awarded him an honorary M.A. degree in 1880. By 1885, the conflict between teaching and practice caused Harris to resign his position with the university. The School of Medicine then ceased operation until 1890, when it reopened under the deanship of Dr. Richard H. Whitehead.

Following his resignation, Harris moved to Durham where he continued a general and surgical practice until his death three years later. He was survived by his wife and several children. A portrait, commissioned by Dr. Isaac Harris, hangs in The University of North Carolina Medical School library.