Barbara Bynum Henderson, poet, translator, and pioneer leader in the North Carolina woman suffrage movement, was born into a family closely connected with the Episcopal 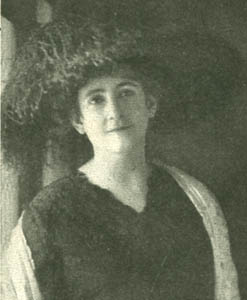 church. Her father, William Shipp Bynum, was an Episcopal clergyman and her mother, Mary Louise Curtis, was the daughter of the Reverend Moses Ashley Curtis, headmaster of the Episcopal School for Boys (predecessor of Saint Mary's College, Raleigh), rector of several churches in the state, and noted botanist and mycologist. Her formative years were spent in Salem (where she was born), Charlotte, and Lincolnton. After graduating with high honors from Saint Mary's College in 1899, she continued her studies at The University of North Carolina where she was elected to Phi Beta Kappa and was graduated in 1902 with the A.B. and M.A. degrees. In college, she wrote numerous poems which were widely copied by college papers and published in anthologies of American college verse.

Mrs. Henderson is best known for her translation from German of Hans Ernst Lissauer's "Hassgesang gegen England" ("Hymn of Hate against England"). The translation was published widely in newspapers and periodicals in this country and abroad, shortly becoming more famous than the original German poem. When it appeared in The Times of London, that paper in a long and enthusiastic editorial commented, "She is to be congratulated on a piece of extraordinarily good work in one of the most difficult arts. The lines have a fine natural swing and the language glows with the fire of intense sincerity."

Mrs. Henderson also gained considerable recognition as a poet in her own right. "The March of Women," published in 1915 during the suffrage struggle, became very popular and helped to rally the women of North Carolina in their battle for the ballot. A poem she wrote about Colonel Charles A. Lindbergh was chosen for a commemorative volume, The Spirit of Saint Louis . The last of her poems to receive wide publication was "Prayer for All-Souls," which appeared in the Saturday Review of Literature in 1944. Wars and Rumors of War, a volume of eighteen poems and translations concerning World Wars I and II, was published in 1950. On her death, she left a large number of unpublished poems.

In addition to her literary interests, Mrs. Henderson distinguished herself as a leader of the suffrage movement in North Carolina. In 1913 she organized and was elected president of the Equal Suffrage League of North Carolina, and in 1915 she was unanimously reelected for a second term. Besides organizing and leading the movement, she was responsible for carrying the battle into the General Assembly when a special session was called to consider woman suffrage. She also published several poems and bulletins to help the cause.

Mrs. Henderson died after an illness of several years, survived by her husband, five children, sixteen grandchildren, and four great-grandchildren. She was buried at Calvary Episcopal Church in Fletcher.