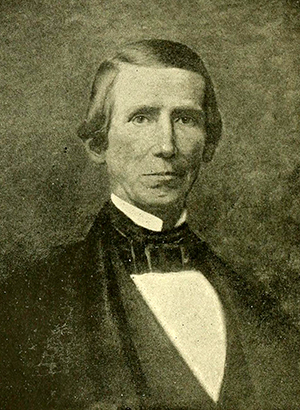 James Pinckney Henderson, soldier, lawyer, diplomat, and first governor of Texas, was born in Lincolnton, the son of Lawson and Elizabeth Carruth Henderson. He received his early education at Lincoln Academy, apparently studied law privately in Chapel Hill, was admitted to the bar in 1829, and practiced in North Carolina. Having demonstrated an interest in the militia, Henderson was named aide-de-camp with the rank of major at age twenty-two; later he served as colonel of a regiment. In 1835 he moved to Canton, Miss., where he developed a popular legal practice, an excellent reputation, and a desire to participate in the Texas revolution. In the spring of 1836 he organized a company of Mississippi volunteers to assist the struggling republic, but the Mexicans surrendered before Henderson reached Texas. He then joined other newly arrived Americans to prevent the return of Santa Anna to Mexico by Texas authorities. The Texas government appointed him a general and sent him to recruit troops in the United States. He is reported to have brought a company of North Carolina men to Texas at his own expense.

When Sam Houston took office as president of Texas in 1836, he named Henderson attorney general. Following the death of Stephen F. Austin a short time later, Houston made him secretary of state. In 1837, the president commissioned Henderson as agent and minister plenipotentiary to England and France to seek recognition for the new republic. Henderson failed to persuade the British to recognize Texas, but they did agree to a trade convention. He was more successful in France, which recognized the new nation in 1839. Henderson returned to Texas in January 1840 with his bride, Frances Cox of Philadelphia, whom he had recently married in London. They settled in San Augustine where he practiced law. The Hendersons had five children, two of whom died young.

In 1844, Houston sent him to Washington, D.C., to assist Isaac Van Zandt, Texas chargé d'affaires, in annexation negotiations. Representatives of the two countries agreed to a treaty, but the U.S. Senate rejected it. Houston then recalled Henderson. The next year, however, by joint resolution, the United States agreed to annex Texas, and the Texans accepted the offer. Henderson served as a member of the convention to draw up a state constitution for Texas, as required for its admission to the Union. In the same year he was elected governor of Texas and took office on 19 Feb. 1846, when the republic formally came to an end.

When war with Mexico broke out in 1846, the state legislature granted the governor a leave of absence to serve in the army as a major general. He participated in the Battle of Monterey and was one of three American commissioners who negotiated the surrender of that city.

After completing his term as governor, Henderson returned to his law practice. In 1857, the legislature elected him to fill the unexpired term of the late Senator Thomas J. Rusk. Henderson died while in Washington, D.C., and was buried in the Congressional Cemetery. His body was reinterred at Austin, Tex., in 1930. Henderson County, Tex., was named in his honor.