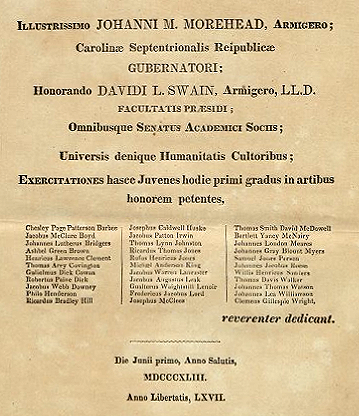 Philo P. Henderson, poet, was born in Central Mecklenburg County, the son of James P. and Harriet Wallace Henderson. The Henderson family was a proud one of Scottish descent. Philo had two brothers and two sisters: Matthew, who died young; Thomas Cairns, salutatorian of the 1856 class at Davidson College; Martha (Mrs. E. L. Burney); and Lilly (Mrs. J. C. Caldwell). A well-to-do farmer and later a merchant, the father early recognized Philo's potential and sent the boy to the Latin academy at Sugar Creek Church after elementary schooling near the farm.

In 1839 Henderson was enrolled at Davidson College, where his intellectual qualities were somewhat offset by an arrogant impetuosity. On one occasion, at a meeting of the Philanthropic Society, he was "fined 6 1/4; cts. for leaning against the wall." Later, after a minor altercation in the dining hall, he drew a knife on the steward and the next day threatened the man with a pistol. For this offense—to the distress of the students among whom he was "entertaining, popular and magnetic"—he was expelled. He then entered The University of North Carolina as a sophomore. At Chapel Hill "he was rather wild," wrote a contemporary of his, "but never guilty of anything dishonorable." His record was without distinction, his marks were only average, and his irregular attendance at required assemblies was reprehensible. In his senior year he was absent from chapel 12 times, from prayers 46, and from lectures 57. Even so, he was graduated with a B.A. in 1843 and went to Mocksville to study law with Judge Richmond Pearson.

After visiting his Henderson relatives in Missouri in 1844, he was granted a license to practice his profession and settled in Charlotte. At that time he was a handsome fellow, "his eye bright and beaming with poetic fire," his "luxurious curls" dropping "to his shoulders in rich profusion." His name, Philo, was indeed prophetic. The young ladies were attracted to him, and he to them. Often he fell in love, and always he wrote poems to commemorate his rapturous encounters. First there was Mary, and when they parted, he succumbed to a debilitating period of drink. At least thirty-nine of his uncollected poems have been cited in manuscript and in print. While five are addressed to a damsel named Rotha, the love of his life was Ada (Miss M. Addie McCleary of Mecklenburg County), about whom he wrote his most frequently reprinted poem, "The Flower of Catawba." Like the heroines in the works of Edgar Allan Poe, whose influence on Henderson is obvious, his young ladies seemed to be fragile maidens soon to die. Other typical verses of Henderson are "The Anthem of Heaven" and "On Receiving a Present from a Lady." Though not credited on the masthead, he served as unofficial assistant to editor J. Lawrence Badger of the weekly Hornets' Nest in Charlotte, where many of his poems first appeared.

It is said that "false friends betrayed Ada, and made her break, at the same time that it broke her heart, her plighted troth with Philo. And then his heart-strings snapped like the strings of a madman's taut-strung harp." He returned to his parents' home to recover, then, on a visit to Charlotte, became ill and died. "The Isle of Long Ago" and "Swannanoa," two esteemed poems of the day, have frequently been attributed to Henderson, but his authorship is not only unauthenticated but also unlikely. He was buried in the second cemetery at Sugar Creek Church, Charlotte.