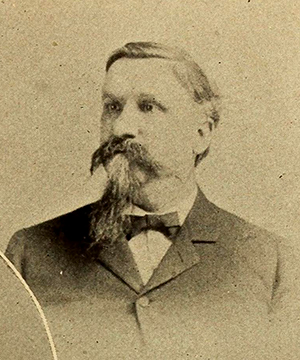 John Kerr Hendrick, congressman and lawyer, was born in Caswell County, the son of William H. and Susan Bennett Hendrick, both natives of Virginia. In 1856 the family moved to Logan County, Ky., where young Hendrick continued his education in local schools and at Bethel College, Russellville, Ky. While teaching school, he studied law under his uncle, Judge Caswell Bennett, and was licensed in 1875. Practicing first at Smithland, he moved to Paducah in 1898.

Hendrick was a delegate to the Democratic National Convention at St. Louis in 1888. A state senator for four years, he was elected to Congress in 1894, serving from 4 Mar. 1895 to 3 Mar. 1897. In 1877 Hendrick married Lula Grayot, and they became the parents of Alfred A., W. R., Harry B., and Nellie. He was buried in Maplelawn Cemetery, Paducah.

"John K. Hendrick M.C. 1st Dist." Photograph. The United States red book, containing the portraits and biographies of the President and his cabinet, senators and members of the House of representatives. Albany [N.Y.]: James B. Lyon. 1896. Between 144 and 145. https://archive.org/stream/unitedstatesred00murl#page/n291/mode/2up (accessed April 16, 2014).