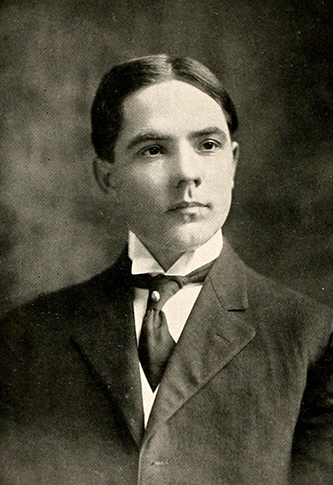 John Henry Highsmith, public educator, was born in McDaniel Township, Sampson County, the son of Lewis Whitfield and Margaret Tatum Highsmith. He grew up in Durham where he was graduated from public high school in 1896 with a scholarship to Trinity College (now Duke University), receiving the B.A. degree in 1900 and the M.A. degree in 1902. From 1901 to 1904, he served as principal of North Durham School. After attending Teachers College, Columbia University, from 1904 to 1906 as a graduate scholar, he was professor of Bible and philosophy at Meredith College (then known as the Baptist University for Women), Raleigh. In 1907, he became professor of education at Wake Forest College where he taught for ten years.

Highsmith began his career with the state public school system in 1917, when he was appointed by Governor Thomas W. Bickett to the State Board of Examiners and Institute Conductors. In 1920 he was named state inspector of high schools, a position later entitled state high school supervisor, and in 1932 he became director of the Division of Instructional Service of the State Department of Public Instruction where he served until his death. He continued to teach throughout his life, primarily in the summer school sessions at the University of Louisiana, North Carolina State University, The University of North Carolina at Greensboro, and Duke University. He was awarded a doctor of letters and law degree by Catawba College in 1925 and a doctor of education degree by Wake Forest College in 1934.

Highsmith was known for his unwavering commitment to quality high school education for all children in North Carolina. He was a staunch advocate of the consolidated high school that offered a comprehensive curriculum, of the accreditation of secondary schools to promote and assure high standards in high school facilities and teaching, and of higher standards of instruction through better teacher training by the colleges and teacher certification. His plan for reorganizing the state's high schools in 1925–26 was heartily endorsed by the North Carolina College Conference. As a representative of the General Education Board, Highsmith served as director of the reorganization of the high schools in Oklahoma in 1928 and in Mississippi in 1929. In the latter year he was president of the National Association of State High School Supervisors.

Through the Southern Association of Colleges and Secondary Schools he served the cause of better education in the South, principally by work on various committees. He was chairman of the Committee on Libraries for several years when the group did much to raise the standards for libraries in high schools and colleges in southern states. He was also chairman of the Committee on Negro Schools, responsible for the accreditation of African-American high schools and colleges throughout the South. He served as chairman of the Committee on Secondary Education and as vice-president of the Southern Association of Colleges and Secondary Schools in 1946. Among the significant programs he developed to raise the standards of instruction in North Carolina high schools was the professional supervisor staff within his division.

Highsmith wrote extensively for professional journals and participated in educational organizations at all levels. In 1939 he was president of the North Carolina Education Association, which elected him post-humously to its Hall of Fame. The citation, read on 16 Mar. 1960, stated: "It must be said . . . that public education was the passion of his life."

A Baptist, he was active in the work of his church throughout his life, serving as president of the Board of Education of the Baptist State Convention from 1932 to 1938 and as a long-term deacon and superintendent of the Sunday school of the First Baptist Church in Raleigh. He was a member of Phi Beta Kappa, a Rotarian, a Mason, and a Democrat.

In 1907 Highsmith married Lula V. Johnson, who died in 1919; they had one son, John Henry, Jr., and one daughter, Lula Belle (Mrs. Orus N. Rich). In 1921 he married Kate M. Herring, and they had two daughters, Katherine Herring (Mrs. Kern Holoman) and Louise Westbrook (Mrs. Louis R. Wilkerson). Highsmith was buried at Montlawn Cemetery in Raleigh, where he had made his home for thirty-three years.