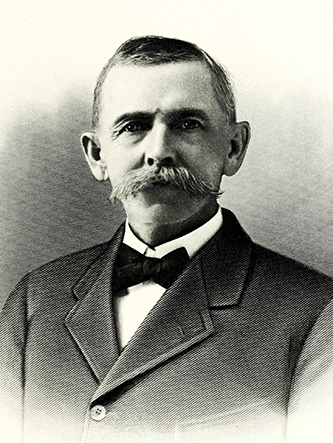 Lovit Hines, merchant, the son of James Madison and Nancy Thompson Hines, was born in Wayne County but the next year the family moved to Lenoir Institute, Lenoir County. During the 1870–71 session, he attended Wake Forest College where he studied Latin, English, and mathematics. Returning to Lenoir County, Hines worked as a farmer and in his father's sawmill. After operating his own lumber business for several years, he formed a partnership with his brother, Wait T., at Dover in 1889. In 1893 the Hines brothers purchased the Greenville Land and Development Company, and, with P. H. Pelletier and S. C. Hamilton, created the Greenville Lumber Company. The firm burned in 1896.

The following year Lovit and Wait Hines went back to Lenoir County and organized the Hines Brothers Lumber Company at Kinston. Their $6,000 investment, consisting of lumber and machinery from the Dover mill, was matched by Henry C. Riley of Charles S. Riley and Company, Philadelphia. This manufactory produced railroad crossties, bridge timber, tobacco sticks, moldings, bed slats, and fence posts, as well as lumber for tobacco hogsheads and boxes. The company owned 24 miles of narrow-gauge railway from Kinston into the surrounding forest, and operated a train on standard gauge track from Kinston to Snow Hill in Greene County. The firm also operated heavy equipment in connection with its logging activities. By 1919, Hines Brothers Lumber Company employed 300 men and produced 65,000 feet of lumber a day.

Hines married Mollie Jane Murphy on 23 Dec. 1879; they had eleven children, seven of whom survived. Mollie Hines died on 31 Dec. 1907. He then married Polly Jones on 1 Sept. 1908; this union produced five children. Hines was buried at the Maplewood Cemetery, Kinston.

I was born in Lenoir County

I was born in Lenoir County North Carolina in 1944 and doing some family research. Wanted to know if you have a copy of a map showing the location of the 24-mile railroad spurs built by the Hines for lumbering in Lenoir County North Carolina. Your response will be highly appreciated since I may have lived in close proximity to the spur from Dawson Station to city of Kinston.

The maps in our collection of railroads in that area showed only the main transportation routes, not the various industrial branches that existed throughout different time periods. I would recommend contacting one of the local historical information groups like the Lenoir County Historical Association at (252) 522-0421 or the Kinston-Lenoir County Public Library at  252-527-7066.

I hope this helps. Please feel free to respond to this post with any further questions or comments.

This is my great grandfather!

This is my great grandfather! Thank you for posting. I am the youngest daughter of Samuel Philip Hines, Jr. His father (same name) was I believe, Lovit's son. I will let my dad know (he is 94 now) about this post! Thank you!

Julia, do u have any

Julia, do u have any information about the rail spur that was in operation in the early 1900s between Snow Hill, North Carolina through Dawson Station and onto Kinston NC? Your response will be appreciated.