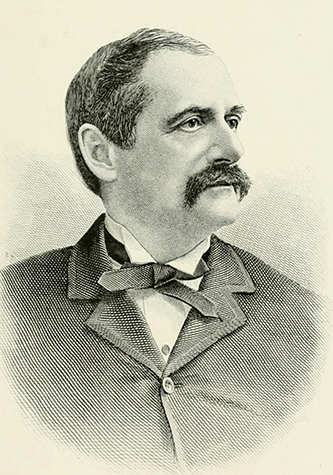 John Wetmore Hinsdale, Confederate officer, attorney, and president of the North Carolina Bar Association, was born in Buffalo, N.Y., the son of Dr. Samuel J. and Elizabeth Wetmore Hinsdale; he moved to Raleigh with his parents when only a few months old. On his father's side he was descended from Comfort Sage and Jabez Hamlin, both colonels in the Continental Army. Through his mother he was descended from Richard Cogdell, New Bern patriot, and from Governor William Bradford and Elder William Brewster of Massachusetts.

Hinsdale was educated at Donaldson Academy in Fayetteville and Starrs Military Academy in Yonkers, N.Y.; in 1858 he entered The University of North Carolina. In 1861, at the outbreak of the Civil War, he was commissioned a second lieutenant in the Eighth North Carolina Regiment. He served with distinction as aide de camp to Brigadier General T. H. Holmes; as adjutant general with Brigadier General J. Johnston Pettigrew, General W. D. Pender, and General T. H. Holmes; and as inspector general with General Sterling Price. Afterwards he was elected colonel of the Third Regiment Junior Reserves (Seventy-second North Carolina), a post he held until the end of the war.

After being paroled at Bush Hill, N.C., on 2 May 1865, Hinsdale attended the Columbia University Law School and in 1866 was admitted to practice in New York and North Carolina. He was associated first with John Devereaux in the firm of Hinsdale & Devereaux, practicing in Fayetteville and Carthage; the firm later expanded to include Raleigh. About 1875 Hinsdale moved to Raleigh but for several years continued to maintain offices in Fayetteville and Carthage.

Hinsdale's practice in both state and federal courts, including the United States Supreme Court, was concerned primarily with railroad, insurance, corporation, and commercial law. In a sketch of Hinsdale, published in the 24th Annual Report of the North Carolina Bar Association (1922), Judge Robert W. Winston said: "It may be doubted if the state has had a more painstaking laborious lawyer than John W. Hinsdale. His pleadings, drawn with great care and caution, were comprehensive to a degree; his cases were prepared with meticulous attention to details . . . his briefs were the apple of his eye, collecting, digesting, assimilating decided cases from every imaginable jurisdiction, often becoming full-grown textbooks."

His professional activities were varied. In addition to providing an annotated edition of Winston's North Carolina Reports in 1878, over a period of years Hinsdale contributed digests of North Carolina laws, forms, and a court calendar to legal directories including Martindale's Legal Directory and Sharp and Alleman's Lawyers and Bankers Directory. His interest in improving court procedures resulted in his authorship of the Equity Reference Act and the Non Suit Act, both of which were adopted by the North Carolina legislature. Until the law on non suits was revised in 1970, attorneys regularly made the motion for non suit by stating, "I would like to make the usual motion under the Hinsdale Act." He was elected president of the North Carolina Bar Association in July 1909.

Cyclopedia of Eminent and Representative Men of the Carolinas of the Nineteenth Century, vol. 2 (1892).

Hinsdale, John Wetmore. History of the Seventy-second Regiment of the North Carolina troops, in the War Between the States, 1861-'65. Goldsboro, N.C.: Nash Brothers. 1901. https://archive.org/details/historyofseventy00hins (accessed September 5, 2013).